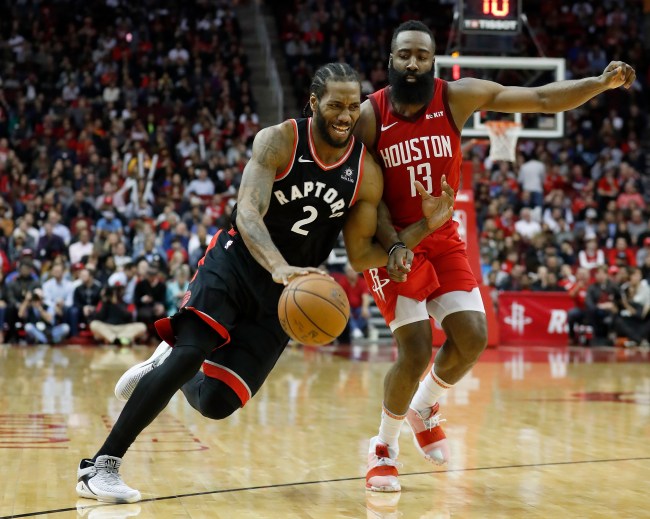 The Los Angeles Clippers may have had the most productive offseason in the NBA; and that’s really saying something. In a summer that saw superstars move all over the place — like Anthony Davis going to the Lakers, Russell Westbrook being traded to the Rockets for Chris Paul and Kevin Durant and Kyrie Irving joining forces on the Nets — it was that “other” team in Los Angeles that may have made the biggest splash by acquiring both Kawhi Leonard and Paul George.

As impressive a feat as it was for the Los Angeles Clippers to add two All-Stars and legit MVP candidates, the team, reportedly, tried to make an even bigger splash by going after former league MVP James Harden to pair with Leonard. That’s according to a new piece from The Athletic, which outlines some of the details of the trade inquiry, which was shutdown from the Rockets.

As the Clippers surveyed the NBA scene, it wasn’t yet clear whom they could pair with the 2019 Finals MVP. They analyzed and studied every roster and star player in the league, attempting to find out who would best fit alongside Leonard, both on the hardwood and from a personality standpoint.

The Clippers inquired about Washington’s Bradley Beal and Houston’s James Harden, according to league sources, but neither star was available.

Don’t get me wrong, adding Paul George alongside Kawhi Leonard is a phenomenal pairing — especially given the defensive skills of each — but having a guy like Harden who can take over games and, seemingly at will, drop 40 any night he wants to would have been fun to watch. For obvious reasons, though, the Rockets are trying to retool and chase a title, not rebuild and sell off the face of their franchise.

In the same article from The Athletic, the reports of Leonard recruiting George to join him on the the Los Angeles Clippers are “not accurate,” but with both finding a way to join the team within hours of one another, it’s hard to believe that’s 100 percent accurate. We’ll probably never know the actual truth, but, for Clips fans, they probably don’t care, because the team showed to be aggressive this summer by getting two top-10 players — and, from the most recent report, the team even tried getting a top-5 talent in Harden. Can the season just start already?