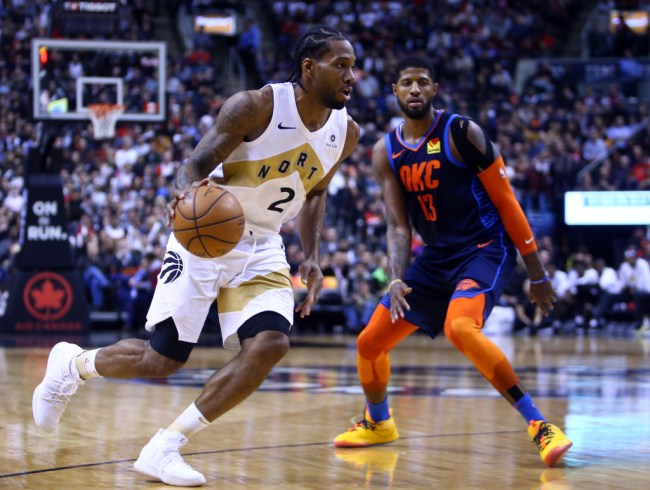 Last year’s NBA offseason was a fairly entertaining one thanks to the mystery surrounding LeBron James’ future but it has nothing on this year’s free agency period, which has already provided us with more drama than every single episode of Vanderpump Rules combined.

Things kicked off with a bang big enough to form another universe when Anthony Davis was traded to the Lakers months after rumors about a possible deal started to swirl, and following just as much speculation, Kevin Durant revealed he’d be teaming up with Kyrie Irving in Brooklyn.

However, there was one major name who took his sweet time making up his mind: Kawhi Leonard.

LeBron did what he could to get Leonard to come to Los Angeles, and in the end, the former Raptor decided to do just that when he signed with the Clippers, who also managed to land Paul George as the result of a monster trade.

It would eventually be revealed that Leonard never had any interest in joining forces with LeBron and AD to create what would have been the NBA’s most formidable superteam, but according to ESPN, it appears he did what he could to put together one of his own:

In one backroom power move, Kawhi Leonard rescued Paul George from a capped-out low-level playoff team; rejected the Lakers’ attempts to build perhaps the greatest big three in basketball history; and left the league as open as it has been in years. The league’s quietest superstar “found his voice,” as one executive put it. He recruited George, Durant and even Kyrie Irving at points, sources say.

As Bleacher Report notes, Durant was reportedly impressed with Leonard’s sales pitch, and while it’s unclear if the most recent Finals MVP was pursuing Irving as part of a package deal, it doesn’t seem too far-fetched to suggest he wanted to be part of what would have been the scariest starting trio in the league.

Now that this year’s biggest free agency names have made up their minds, it looks like we’re in store for one hell of a season as a result of the newfound parity.

I’m already counting down the days to tipoff.