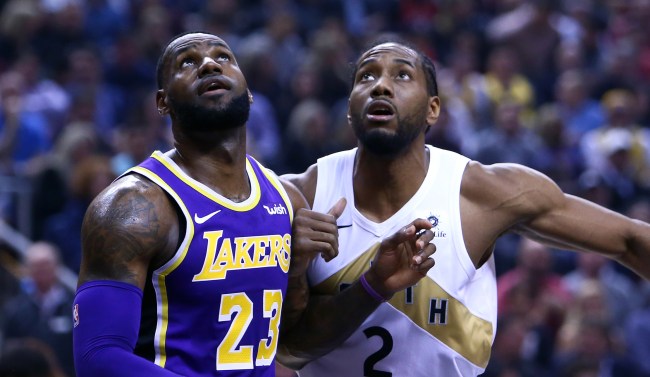 Five days ago, our friends over at BetOnline.AG sports book had the Toronto Raptors as very heavy favorites (2/5) to sign free agent superstar Kawhi Leonard.

The only other teams they believe to really be in the mix to land Leonard other than Toronto are the Clippers at 3/2 and the Lakers at 9/1.

Early reports said that LeBron James had already met with Leonard during the playoffs to pitch him on joining the Lakers, but most pundits didn’t take it too seriously.

This week Leonard will reportedly be meeting with the three teams considered the favorites to back up the Brinks truck in order to sign him with the Raptors getting the final shot at signing him.

Now, according to Ryen Russillo on Adrian Wojnarowski’s podcast, the recruiting pitch that LeBron James will be using this week in an effort to convince Leonard to join the Lakers has been revealed.

“From what I’ve heard, and I know you trust me with this just because I have these weird relationships, especially living out here in Los Angeles now. The Kawhi pitch, whether it is from the Lakers or LeBron, is this: LeBron is basically saying, ‘Hey, this is going to be your team in two years.’ I have heard this for years, but LeBron at one point wants to play with his son. And depending on when that happens, that is going to be his priority and that may not be with the Lakers. So, I don’t know when that is going to be and that [is why LeBron is] willing to defer. LeBron is saying for the first time in his basketball life that he is willing to defer the style of play,” said Russillo.

“They are going to tell [Kawhi] anything he wants to hear. They are going to tell Kawhi, ‘You can take all the last shots. We can run the offense through you.’ And LeBron has a style of play that could, I’d say, adapt to another guy like that. Anthony Davis puts up massive numbers without being selfish so I could see it working.”

So is it really possible that Leonard would go to L.A. to play alongside LeBron and Anthony Davis?

"I have received the word that Kawhi Leonard is seriously considering the Los Angeles Lakers."

That would be one hell of a starting five if he did.