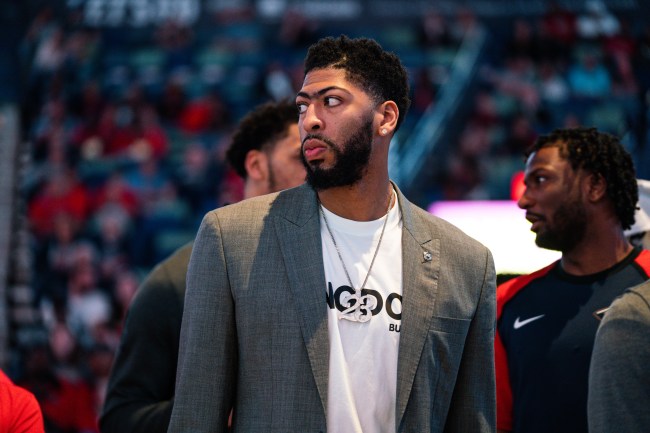 Anthony Davis got his wish a couple weeks ago when his trade request to his now former team, the New Orleans Pelicans, was granted, with the Pels shipping the All-Star off to his preferred destination in a blockbuster deal with the Los Angeles Lakers. While Davis’ trade to the Lakers was the first piece in what’s already been a wild offseason so far — and we’re only in the second day of free agency — the Lakers needed to get it done to put an end to the drama that had been surrounding them ever since last summer after signing LeBron James. They needed to prove they had a plan to build a title contender, and Anthony Davis immediately helps them do that.

While Davis has been pretty quiet since moving out to Los Angeles — the biggest news was that James would give up No. 23 for the big man to wear with the Lakers — he finally broke the ice in an interview with the Los Angeles Times‘ Arash Markazi, who sat down with Davis following the announcement that Anthony Davis would join Dwyane Wade as the cover athletes for NBA 2K this year. Talking about a variety of different things, the newest Lakers star opened up about why he preferred the iconic franchise over anywhere else, and why his admiration for LeBron helped be the driving force.

“I always looked up to him. As a kid, [James] and Michael Jordan were the two guys I [admired],” Davis said. “I didn’t get a chance to watch Michael Jordan live, but I watched LeBron a lot after he entered the league, and he was the guy that I looked up to.”

Makes sense, considering Anthony Davis was just 10 years old when LeBron first entered the league in 2003, meaning he was 14 when James reached his first NBA Finals with the Cleveland Cavs four years later. With a lot of these 20-something superstars, James represents that icon, so why not try to play with him if the opportunity is there, right?

As for his legacy, Davis mentioned it as a reason for waiving a complicated trade kicker that opened up an additional $4 million in cap room for the Lakers, which can now be used to, potentially, get a second max player — with Kawhi Leonard being the most rumored superstar. He said that it gives the Lakers a better chance to build something great, which, ultimately, impacts his overall legacy.

“Money comes and goes; your legacy is forever. I think how you establish yourself in the NBA and what you do on and off the court is something that people will remember forever. Obviously, our money is public and people know what we make, but at the end of the day no one cares about how much money you make.

“Anthony Davis is not going to be a great basketball player because of the amount of money he makes, it’s going to be about what he achieved on the court and also off the court. That’s all part of my legacy, and I think that’s way more valuable than any monetary value.”

After finishing last season injured and on a minutes restriction for most of the second half of the season, Anthony Davis has plenty to prove as he tries to take the leap from superstar to NBA champion. If there’s one player in the league worth riding the coattails to try and do that, it’s LeBron James, so it’ll be interesting to see how they mesh on the floor and how the Lakers fill out the roster alongside them in a quest for a title.