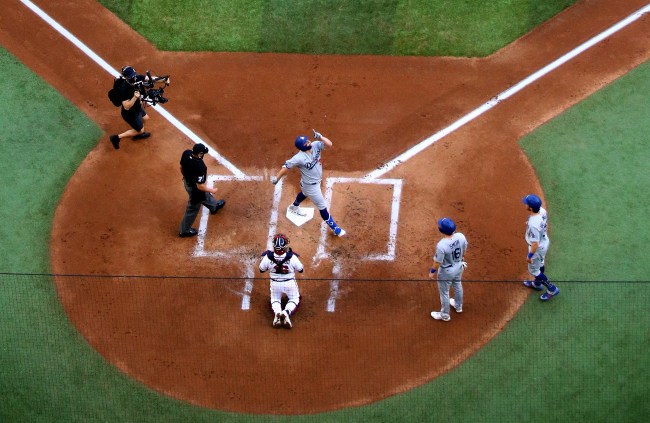 Game 3 of the NLCS was over for the Atlanta Braves before their first batter even got to the plate. The Braves entered the game with a 2-0 series lead over the Dodgers who were the overwhelming favorite to win the World Series coming into these playoffs and the Los Angeles Dodgers had been cruising up until this series when Clayton Kershaw was sidelined with back spasms and hasn’t been able to pitch in the NLCS yet.

The Dodgers looked lackluster up until the 7th inning of Game 2 when they were trailing 7-0 to the Braves but put up 3 runs in that frame and battled back in the 9th to an 8-7 loss. They then carried that momentum through the night and scored 11 runs in the top of the 1st inning on Wednesday in Game 3 of the NLCS.

Los Angeles broke some records on Wednesday which we can check out below but before we do that I suggest everyone (except Braves fans) take a moment to re-watch this supercut of the Dodgers’ 1st inning of Game 3 because it’s some of the highest-scoring baseball you’ll ever see in your lifetime.

The Dodgers cruised to a 15-3 win in Game 3 of the NLCS over the Braves.

They set several franchise postseason records in the process, including:

Atlanta still holds a 2-1 lead in the best-of-7 series. pic.twitter.com/b8QOciqJC3

The 11 runs scored by the Dodgers in the 1st inning is the most runs scored by any team in a single inning in postseason history. They also tied the record for the most batters sent to the plate (14) in any inning in MLB postseason history. The game really was over before the bottom of the 1st. The Dodgers could’ve realistically sent a position player out there to pitch to save their bullpen arms and they probably still would’ve won the game.

The Dodgers sent 14 hitters to the plate as part of their 11 run 1st inning.

That's tied for the most hitters sent to the plate in the 1st Inning of a game in postseason history.

The only other occurrence was the Cardinals in Game 5 last year's NLDS, also against the Braves. pic.twitter.com/ULK1yRNFrD

The Dodgers have jumped out to a 11-0 lead in the top of the 1st inning in Game 3 of the NLCS.

That is the most runs scored in a single inning in postseason history. pic.twitter.com/lhbWJ79ERD

The Atlanta Braves still hold a 2-1 series lead over the Dodgers but Los Angeles has been thrashing the Braves for the past 10 innings (Wednesday + 9th inning on Tuesday). If I’m Atlanta, I’m pretty damn worried about this offensive explosion from the Dodgers.

Meanwhile, the Tampa Bay Rays fell to the Houston Astros 3-4 in Game 4 of the ALCS. My Rays (yes, we Rays fans exist) hold a commanding 3-1 lead in the series and will likely close out the ALCS tonight and get some rest before meeting Atlanta or Los Angeles in the World Series. It’s been fun to see the Rays become America’s Team with every baseball fan outside of Houston rooting against the cheating Astros and it’ll be a bummer to see that support come to a close with the World Series starts next week.

Big shout out to this guy:

Someone with a bullhorn behind Petco Park is talking about the Astros: "The baseball community has not forgotten your transgressions."

This man is now going through each player and saying: "You are a cheater, shame on you."

A man outside of the ballpark is on a megaphone yelling that "the Astros are a bunch of cheaters" and that "Jose Altuve, you are a cheater, shame on you." They are going down the list of players who were on the team and saying the same thing