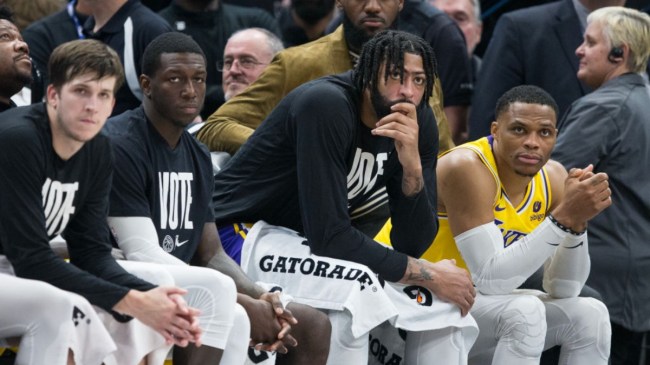 There are very few teams in the NBA that have kept themselves as busy in trade talks as the Los Angeles Lakers since the end of the 2021-22 season.

They spent the entire offseason trying to improve their roster and to trade Russell Westbrook after his disappointing first season with the team. They didn’t accomplish either of those things.

Now they’re 10 games into the new season and it has once again been a struggle for the Lakers. The team is 2-8 and has been the worst 3-point shooting team in the league.

With the Lakers seemingly on their way to missing the playoffs for a second consecutive season, it appears they could be returning to the trade market to seek out a blockbuster deal. According to Ben Simmons, the Lakers are exploring a trade for Anthony Davis.

Los Angeles Lakers are exploring a trade for Anthony Davis

New @BillSimmons Podcast with @TheCousinSal recapping this week in the NFL then they Guess The Lines. Then NBA talk with me because Bill is hearing some buzz that Anthony Davis may be available for trade. So we got into the Lakers' approach and best fits. https://t.co/uYC0OcLYaA

There’s some buzz, some buzzing that AD might be available. That that’s a plan B. Because the Westbrook trade—or whatever they think they can get for Westbrook and whether you’d want to give up future assets—maybe that doesn’t even make sense because what are you getting if you’re the Lakers?

You’ve got Davis here, who I don’t think has looked the same for a couple years—certainly not close to Bubble Davis. That’s the last time we saw vintage, 2018 Pelicans-level Davis. … I don’t know what the endgame is with this Lakers team, but I know the Pelicans have their pick. And I don’t think, whatever they have, I don’t think it’s really fixable in a way to make them a playoff team.

The Lakers are only 10 games into their season, but they have already reached the point that they need to be examining all of their options. This roster has not turned out to be what the organization had hoped when they put their 3 stars together and the franchise has very few future assets to build on.

If they have decided this team isn’t going to be a winner then it makes a ton of sense for them to start looking to see what kind of future assets they can acquire for their stars and begin rebuilding.