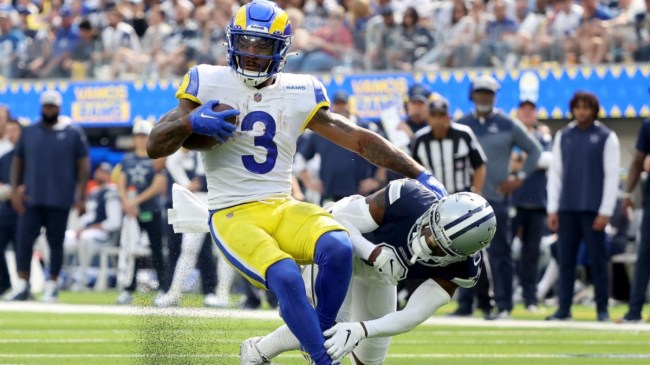 This year didn’t get off to the start many expected for Cam Akers.

In Week 1, fans and fantasy owners were stunned to see Darell Henderson get the start over Akers. He had just 3 carries for no yards in that game.

His situation improved in Week 2 as Akers received 15 carries and 3 targets. He turned those into 44 rushing yards and 18 receiving yards.

Week 3 was his best performance yet, rushing 12 times for 61 yards and a touchdown, finally earning him the starting role for the following week.

Weeks 4 and 5 saw him struggle in the starting role as he posted just 46 yards on 21 carries between games against strong 49ers and Cowboys defenses.

Now it seems he’ll miss out on his next chance to prove himself as the team’s starter. According to a report from Ari Meirov, Akers will be missing Sunday’s game against the Carolina Panthers due to personal reasons.

The #Rams ruled out RB Cam Akers for Sunday vs. Carolina due to personal reasons.

It’s an unfortunate week for Akers to miss. So far this season, the Rams are averaging the league’s least rushing yards per game through the first 5 weeks. This is a good week for them to being turning things around with their run game.

The Panthers have allowed the league’s 7th most rushing yards this season.

The Rams have been searching for something other than Cooper Kupp to give their offense a spark. Now they’ll have to hope their running game can do it with Darell Henderson once again leading the way and Malcolm Brown back in the mix after recently returning to the Rams.

The Rams are on a bye next week, which will give Akers some time to deal with this personal issue before he returns to his starting role in Week 8.