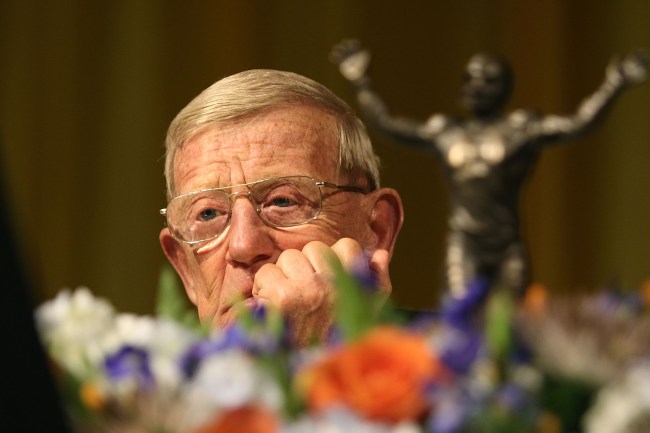 I’m just SO SO SO glad that we’ve finally gotten 83-year-old not at all senile and totally in touch with reality Lou Holtz to weigh in on the dangers facing College Football right now with a pandemic raging all around. Lou hasn’t coached College Football since 2004 but the Hall of Fame coach is still around as an ESPN analyst. He’s also the last coach to win Notre Dame a National Championship waaaaayyyyyy back in 1988.

Lou was a guest on The Ingraham Angle this week where he rambled on comparing the current state of College Football to how soldiers storming the beaches at Normandy knew the risks of casualties, our ‘way of life’, the need for smaller programs to play games, and he also threw in his two cents on how a decline in emphasis on athletics in schools led to the rise of gangs.

Let’s start with the bit about Normandy, shall we? Keep in mind that 2,501 Americans died during the D-Day invasion and there were 4,414 total Allied deaths that day. But yeah, let’s compare that to the need to play a game this Fall.

“When you’re in a leadership role, Laura, you have to look at things from both points of view. Look at it from the player’s point of view, as well as from a coach’s point of view,” Holtz said. “The way it is right now, they just don’t want to have sports and there’s no way in this world you can do anything in this world without a risk. People stormed Normandy … They knew there was going to be casualties, they knew there was going to be risk, but it was a way of life.” (via NYPost)

He could’ve just left his appearance on The Ingraham Angle right then and there and it would’ve been bad enough but he stayed and kept talking. He believes that smaller programs like Louisiana Tech where his son coaches need those ‘money games’ this season or they’ll be devastated. He might be right about that but Louisiana Tech has a current endowment of $99.8 million USD so I think they can miss a single season and be alright.

Lou wants to know what’s happened to our way of life:

“But how are you going to have football when they don’t even want to have school? Notre Dame has said, ‘OK, we’re going to start on August 10.’ Now some of the faculty members have said, ‘It’s too risky, I don’t want to go.’ You have teachers unions saying we shouldn’t go back to school. The underprivileged, the people from the poor neighborhoods, where are they going to get an education? What has happened to our way of life?” (via NYPost)

Coronavirus, Lou. That’s what happened to our way of life. Every country on the planet has been forced to make drastic changes to daily life. The United States is getting absolutely pummeled by NOT CHANGING our way of life as drastically as other countries like New Zealand who are pretty much back to normal by now.

Lou could’ve stopped talking there but he kept going. His quote about gangs is truly something:

We’re six months into this pandemic and the media still insists on rolling out TV guests who specialize in nothing other than armchair quarterback advice on things they have absolutely no expertise about. The Ingraham Angle could’ve invited any one of the thousands of epidemiologists in America on the show to discuss the ways we should be protecting ourselves from the raging pandemic (masks, washing hands, social distancing) but they brought on Lou Holtz instead to talk about Gangs and Normandy.

Anyone else running out of reasons to be hopeful these days?