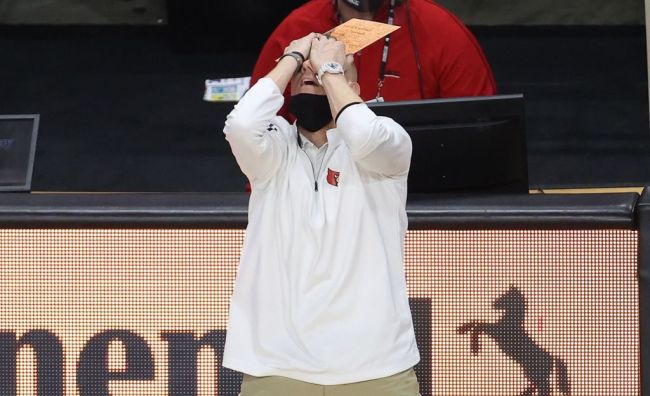 In the last five years, Louisville basketball has one NCAA Tournament win. After beating Jacksonville State in the first round, the Cardinals lost to 7-seed Michigan in the Round of 32. In that same timeframe, the program has appeared in federal court twice. Yikes.

Rick Pitino became the head coach at Louisville in 2001 and during his 15-year tenure, he took the Cardinals to 12 NCAA Tournaments, six Elite Eights and three Final Fours. His teams won at least 20 games in every season but his first and won the national championship in 2013.

However, things went south quickly. Pitino was charged with a “failure to monitor his program” in 2017 as the school was allegedly involved in a “sex-for-pay” scandal— paying women thousands of dollars to dance for and have sex with Cardinals players and recruits.

Federal prosecutors also announced that the school was under investigation for a “pay for play” scandal later in the year. Much like what is going on in the rest of the sport, the school was allegedly working with Adidas executives in paying top recruits to play for the school and wear Adidas when he turned pro. As a result of the (still ongoing and much larger) investigation and court appearances, Pitino was fired and records were vacated from 2011 to 2015.

Pitino was let go and Louisville hired head coach Chris Mack away from Xavier in 2018. He had a notable start to his tenure and pulled a top-5 2019 recruiting class. His first-year team reached as high as No. 15 in the polls and all things looked up at Louisville in year two before COVID-19 shut down the season.

Year three, however, was not quite as successful. Louisville went 13-7 and failed to reach the tournament. The school announced that it would be parting ways with two fairly high-profile assistants in the offseason. One of which being Dino Gaudio.

After his firing, Gaudio went full-blown extortionist and was charge with one federal count of attempting to extort money and other things of value from the university. The news came on Tuesday from Michael Bennett, the acting U.S. Attorney for the District Court of Western Kentucky.

Apparently, Guadio met with Louisville officials on March 17. In the meeting, he “threatened to report to the media allegations that the University of Louisville men’s basketball program had violated [NCAA] rules in its production of recruiting videos for prospective student-athletes and its use of graduate assistants in practice, unless the University of Louisville paid [Gaudio] his salary for an additional 17 months or provided the lump sum equivalent of 17 months of salary.”

Later that day, per the charge, he “sent a text message to the University of Louisville personnel containing one of the recruiting videos he was threatening to send to the media.” Gaudio and his legal team do not plan to fight the charges.

"He lost his temper and said some things he regrets. Unfortunately those things were taped." @WDRBNews pic.twitter.com/cGj3VHdNY1

Louisville addressed the incident in a statement on Tuesday.

“As detailed in the charging document, after Gaudio was informed that his contract would not be renewed, he threatened to inform members of the media of alleged NCAA violations within the men’s basketball program unless he was paid a significant sum of money,” officials said. “The allegations of violations are the impermissible production of recruiting videos for prospective student-athletes and the impermissible use of graduate managers in practices and workouts. While the University cannot comment further due to the ongoing federal investigation and the NCAA process, it continues to cooperate with authorities as well as with the NCAA on the matter.”

Essentially, Guadio was threatening to reveal recruiting violations if it didn’t pay him. The school told him to kick rocks.

So, former Louisville assistant Dino Gaudio was pissed he got fired and threatened to report rules violations regarding recruiting videos and the use of graduate assistants in practices in order to try and get paid for another year-plus.

Not exactly a bombshell.

Louisville’s recent troubles led to people on the internet making all kinds of hilarious jokes.

I have no idea what makes a Louisville recruiting video against NCAA rules but here's my most educated guess: pic.twitter.com/H2ZZzAKCS1

My suggestion for Louisville basketball. pic.twitter.com/nPW2l5MxYs

Louisville basketball is the gift that keeps on giving.

the year is 2057. the niece of a former louisville assistant coach has revealed through old letters that her uncle was connected to the great lemon heist of 2025 in connection with the 2013 mens team. it’s the third scandal that week, down from the week before. attorneys say

Tough day to be Louisville basketball.