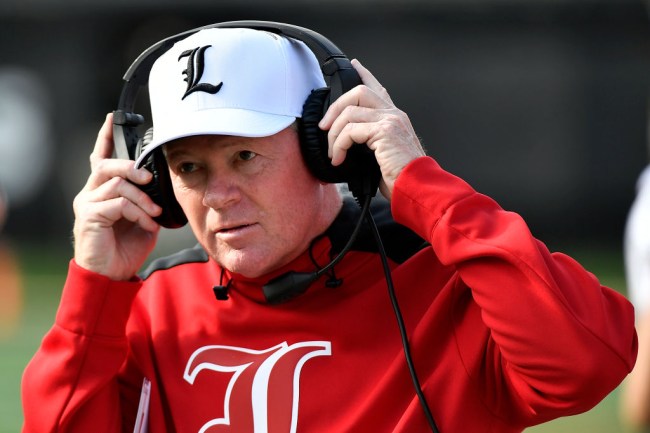 Bobby Petrino has, uh, let’s call it a history and has certainly built this persona and image of being quite the hardass. He also had that minor blunder of an extremely ugly motorcycle accident with Jessica Driscoll on the back, a 20-year-old woman that was not his wife and was actually the former volleyball player turned assistant coach. Let’s just say some poor words and opinions have been shared about the now Missouri State head coach.

JaQuay Savage, a former wideout under Petrino during his time at Louisville, wants to make one thing clear, however: Bobby Petrino is not a racist. There’s no way he could be considered a racist because according to Savage, Petrino just equally hates everybody.

Thats one thing you could never say about my college coach Bobby Petrino. He doesn’t have a racist bone in his body. That mf hated everybody😂

We need to take a moment to admire just how perfect this tweet is from savage. It’s easily the best tweet that will hit the cesspool that is Twitter on Thursday. No, we’re not applauding the fact that Savage just confirmed that Petrino literally hates everyone, we’re applauding the brilliant craft displayed in this tweet.

As previously mentioned, Petrino is getting set to take on a new challenge as the head football coach at Missouri State of the Missouri Valley Conference. He’s taking over a program that posted a 1-10 record a season ago. Petrino’s Bears will open up at Oklahoma this season, so things could get off to a tough start.