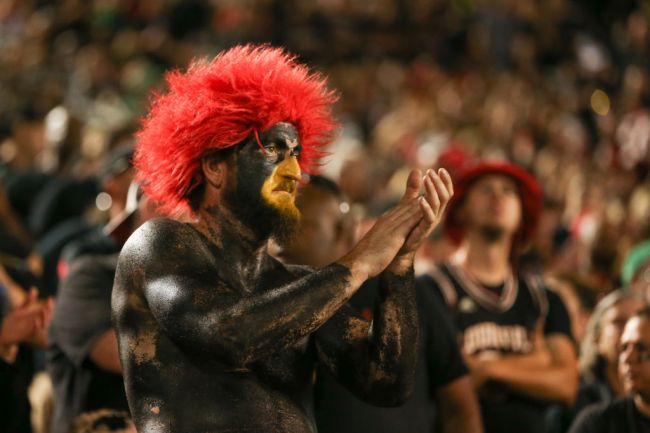 Louisville football’s first home game of 2021 was an absolute dumpster fire. Not only could the Cardinals and their “high-powered offense” only muster 30 points against Eastern Kentucky, but the experience for fans was even worse.

As a result, Louisville fans are blaming the school’s Director of Fan Experience — a Kentucky graduate — for sabotaging the day.

For starters, seats in the stadium were moldy. Like, literally, the seats had mold on them. Gross.

Crazy long lines, no concessions, people angry….and some seats were covered in mold

Off the field going as well as on the field. pic.twitter.com/YFxFSHoJPt

It seems like Vince Tyra is always apologizing or clarifying or making excuses for something. Then again, it is the dustheap that is Louisville, so I guess it makes sense.

Following the horrible experience, Cardinals fans got to sleuthing. They quickly discovered that the athletic department’s Assistant Director of Fan Experience is a big anti-Louisville guy.

So Tyra hired this guy to be the Director of Fan Experience guy? Why am I not suprised? pic.twitter.com/c2jj0ClX94

Noah Peterson, who “hates Louisville more than any other team” is probably not the type of person you would want in charge of anything at Louisville.

He openly despises the school.

At least have him scrub Twitter a little bit. Geez. Not sure how big of a deal this really is, but certainly not a great look. pic.twitter.com/rhzAlYRaHf

Quickly after the discovery, Peterson went into damage control mode and cowardly deleted his Twitter account. At that point, it was too late.

Noah is now off of Twitter dot com. Probably should have done that before being hired. pic.twitter.com/ixdOEaoYDI

Many have sent me the old tweets from a UofL athletics employee Noah Peterson.

Noah did attend and work for Kentucky. He has since also worked for LSU and has learned more self-awareness as he is early in his career. In our candid conversations with Noah

But once again, the ship had already sailed. Louisville fans already took the information and ran with it.

They are now claiming that former Kentucky Governor Matt Bevin used his power to take apart Louisville’s school board.

Yes, Mark the do. They’re hiring uk grads that hate Louisville to be directors of fan experience. Bevin illegally dismantled the board.

Maybe this is why our fan experience is falling apart? https://t.co/eGJtxN6dtW

@vincetyra I keep finding reasons to question why we pay over a thousand dollars a year for football tickets. This is embarrassing, and he should be removed immediately. https://t.co/R75Jhq9Ffu

College football and its fan conspiracies are the best, and Louisville continues to be a gold mine.