Welp, We’ve Officially Found The Laziest Gadget In The History Of Sports… And Laziness 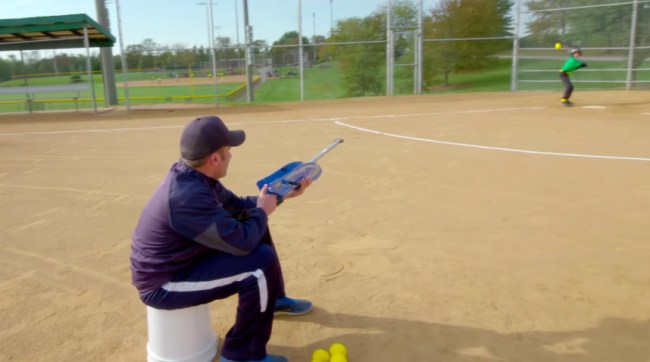 Have you ever wanted to help someone out, perhaps your kid, with his baseball skills, but the idea of actually having to throw a baseball was just too much effort? Then have we got the thing for you: the Louisville Slugger Triple Flame Pitching Machine.

I honestly don’t know how anyone at Louisville Slugger saw this contraption and thought, “Yes, let’s put the company’s name on it!”

Check out a transcript of the video trying to promote this “pitching machine.”

No matter the age of the players, a coach’s job is to put their team in a position to succeed. That means preparing them for everything they’ll face in a game and now you can do that with one portable handheld machine. Introducing the Triple Flame Pitching Machine from Louisville Slugger.

That’s right. They claim that this one “machine” (it’s not a machine) will get the team ready for “everything they’ll face in a game.” I pity the kids whose coach believes this.

The Triple Flame allows for more efficient practices than ever before and it’s easy to use. Just stabilize pull back the arm, load the ball, aim and release for an accurate pitch every time. The variable speed Triple Flame is the perfect machine for training catchers to field wild pitches and pop fouls, but is great anywhere on the field. From pitches to grounders and pop-ups to fly balls the Triple Flame does it all.

More efficient practices? Yes, because rather than having a handful of balls in your glove and throwing them is WAY less efficient than having to load this thing up every time you want to send a single ball a player’s way.

It even throws different types of balls: light flight, practice balls, hard and soft balls, plus it’s perfect for parents who want to help at practice or at home.

Give your lineup a champion’s advantage… the Louisville Slugger Triple Flame, the ultimate pitching machine.

The fact that the dude in the video is sitting on a bucket using this thing to launch balls at a batter shows just how lazy you have to be to actually use it.

Needless to say, the Amazon reviews for this “pitching machine” are priceless. (I left in all the grammar and spelling errors.)

“WE invested three hours into trying to figure this thing out at the park outside of regular practice…and when I got good with all the quirks of trying to get it consistantly pitching….the steel thumb tab that the rubber hooks into snapped and broke almost seriously injuring my son (18 year old)…too flimsy on the steel arm….I am savvy so I fixed it and re enforced it with better steel….but its just not worth it….”

“Machine works good but it didn’t come with any instructions as to where to place it and how far apart you have to be from batter to get a good ball pitched. Moves to much when you try to pitch a ball. Needs some sort of stand so it doesn’t move while pitching the ball.”

Here’s an alternative: throw the ball yourself.

“Bought this to practice hitting with the kids. It’s a little difficult to use and has quite a kickback. Won’t let them use it alone because I feel like the spring could possibly cut off a finger.”

“I use this for launching tennis balls for my dog. Best dog launcher out there. All other break wothin week or 2. I mean all others nerf blaster ect.”

Wait, is he launching tennis balls or his dog?

People on Twitter had quite a field day with this contraption…

Or...you could throw the ball...because it’s baseball and that’s what you do in baseball? 🤔

While they're reloading this toy, I'll lob 17 pop ups to those kids.

If I had a coach bring this out at practice, we’re fighting

Or you could just learn to throw it and hit it yourself like coaches have for years. That seems to have been pretty sufficient the last 10 or so decades

I love that the guy somehow mixes in sitting on a bucket while using the Nerf Crossbow Catapult device...it somehow seems fitting.

Plus if you can’t have someone decent enough to throw BP or play catch...your team has bigger problems.

If you’re a Dad who’s tired of playing catch with your son, we’ve got the tool for you.

I have something similar to this. It's called my right arm.

No way a respectable company like Louisville Slugger put their name on this. This isn't real.

Amazingly, it actually is real.