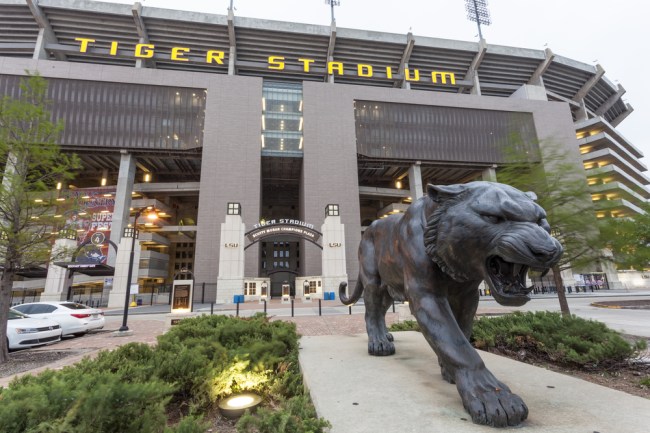 I think back to my days at FSU and how aggressively we’d pregame in the Fall because alcohol in the stadium only existed in luxury boxes. For noon games, the games when the school was trying to keep the fans from becoming too unruly, we’d still wake up at 6 am and start pregaming on Saturday. For the primetime 8:30 pm games we’d start pregaming around 11 am. Well, I’m officially jealous of how easy Saturdays are about to get for LSU fans and current students.

A beer garden could be coming to LSU’s Tiger Stadium before the first kickoff next Fall according to a report from the Greater Baton Rouge Business Report:

Limited beer sales in Tiger Stadium could become a reality by the start of the fall football season. LSU officials confirm that plans for a beer garden in the stadium are firming up, though the deal hasn’t been finalized yet.
“We are aggressively working to have it in place in the fall,” says LSU Spokesman Ernie Ballard. “But we are still working through everything to make it happen.”
LSU Athletic Director Joe Alleva has said for years that he would like to bring beer sales to Tiger Stadium. In 2014, he told the Baton Rouge Press Club that “it’s going to happen at some point—I don’t know if it will be five years from now, 10 years from now.”
More recently, during an interview on LSU’s pregame radio show last September, he said a beer garden “was on the horizon,” though he didn’t specify when.

There are some solid breweries in and around the Baton Rouge/New Orleans area these days so a beer garden makes perfect sense. I foresee a conundrum sprouting up for some of America’s largest brewers, though. On the one hand they’ll 100% want to get in the stadium and have their beers featured in the Tiger Stadium Beer Garden, but on the other hand, these massive breweries can’t appear to be promoting drinking in college. So I think this LSU beer garden will prove to be a great opportunity for craft and micro breweries to get their beers in front of a massive audience.

Furthermore, this could be $$$$$$$ for LSU if they choose to charge a large markup on those beers and charge admission into the stadium’s beer garden to prevent over crowding. $100 additional cost for standing-room only in the beer garden? Why not make it $200? People will still pay it. According to Saturdays Down South, the Texas Longhorns saw sales of $1.3 million after introducing beer into their stadium for football games last season.