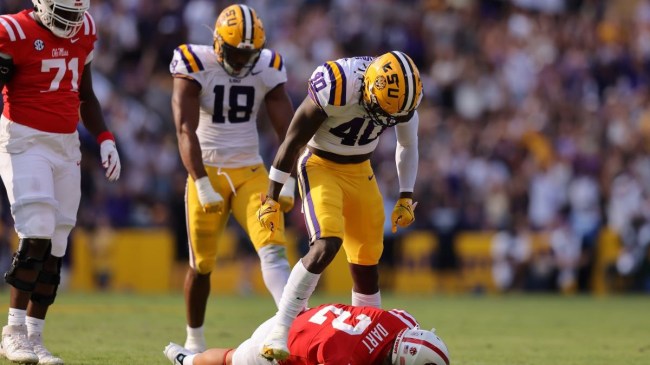 Kelly may not land a bigger commitment in his career with the Tigers. Perkins has been downright electric in the first 10 games of his career. Entering Saturday’s game against Arkansas, he had 44 tackles, 3.5 sacks and one interception. But it was the game against the Razorbacks that truly served as his coming out party.

Perkins was everywhere, acting as a pass rusher as well as a spy on speedy backup quarterback Malik Hornsby.

He put in an absolutely dominant display, notching eight tackles, four sacks and two forced fumbles. But perhaps most impressive is that he came up big in the game’s biggest situations. First, Perkins got to Arkansas QB Cade Ottin and hit his arm, forcing an errant pass and a Razorbacks punt from midfield with just over four minutes remaining.

Then, with the game on the line, Perkins again got to Ottin. This time, however, he forced a game-sealing fumble to move the Tigers to 8-2 and keep them alive in the hunt for the College Football Playoff.

Twitter could hardly contain its excitement over the incredible freshman’s performance.

Harold Perkins Jr. has gone from "great freshman" to "Uh, is he the best defensive player in college football?" in like two weeks.

The 6-foot-2, 220-pound linebacker can’t enter the NFL Draft until 2025. But NFL teams are already lining up for the opportunity to select him.