Alabama Linebacker And Potential No. 1 NFL Draft Pick Will Anderson Just Destroyed A Poor Running Back 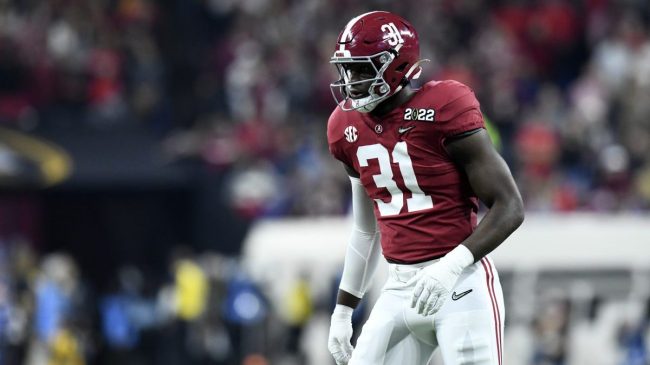 Alabama Crimson Tide quarterback Bryce Young was the 2021 Heisman Trophy winner as the best player in college football. Young is also projected by some to be the first pick in the 2023 NFL Draft.

But he may not even be the best player on his own team.

That honor could well belong to defensive end Will Anderson Jr. Anderson, like Young, wasn’t draft eligible in 2022. But that didn’t stop the Georgia native from absolutely destroying the college football world as a true sophomore.

The former five-star recruit per 247Sports had an absolutely jaw-dropping season he in 2021. He put up a whopping 101 tackles and 17.5 half sacks from his EDGE position and finished fifth in the Heisman Trophy voting.

Anderson is back for what’s likely his final college season in 2022, and he’s back with a vengeance.

Will Anderson Lights Up Poor Utah State Running Back

The Crimson Tide began the 2022 season against visiting Utah State on Saturday night. Alabama opens the season as historically large favorites to win the national title. The Aggies, on the other hand, struggled with Connecticut to begin their season.

It took less than a quarter for Alabama to race out to a 17-0 lead. Then Utah State decided to leave Anderson unblocked on a hand off to running back Pailate Makakona.

OH MY WILL ANDERSON 😤 @AlabamaFTBL pic.twitter.com/aaLMD057eW

Anderson absolutely lit up the defenseless Aggies running back for a huge tackle for loss reminiscent of Jadeveon Clowney’s now-legendary play in the Outback Bowl.

Will just killed a man https://t.co/V07IOeHbFD

And with the first pick of the 2023 NFL draft, the ____ select: Will Anderson, outside linebacker Alabama. https://t.co/9x1HoPNGgP

Georgia defensive tackle Jalen Carter staked his claim as the future No. 1 pick in the 2023 NFL Draft with a jaw-dropping play against the Oregon Ducks on Saturday. Then Anderson followed with an incredible play of his own.

Opposing SEC running back could be in for a long year.