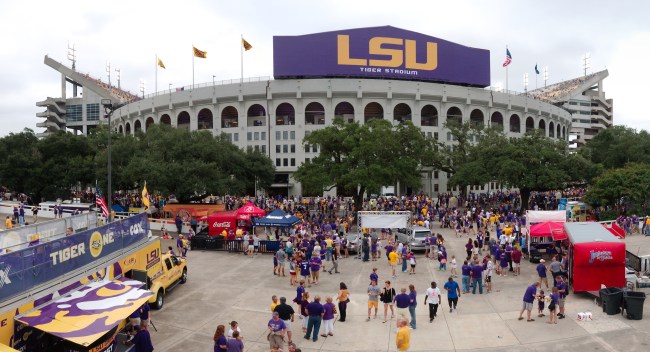 In theory, this could be a trap game. You’ve got a conference rival coming into your house on Saturday night who maybe/possibly/probably has an inflated ranking based on their 1-2 record in the SEC and you (LSU) are the 5th ranked team in the nation who just beat Georgia by 20 points. It would be easy for LSU to look past this game and think about their November 3rd matchup against the Alabama Crimson Tide in Death Valley, a game which will probably be just as hyped as this year’s eventual National Championship.

But all signs point to LSU taking this game as seriously as possible. They’re not thinking about Alabama (yet). They’re busting out the big guns for Mississippi State in the form of helmets which will change colors underneath the lights. THESE ARE THE HOTNESS.

The color-changing helmets are a tribute to the past and pay homage to LSU’s 1918 team that went to fight in World War I instead of playing football. Some of those players never returned from the war and LSU’s busting out these futuristic helmets to honor those fallen soldiers. Also, the LSU Tigers’ uniforms won’t have nameplates on the jerseys this week as a tribute to the deceased.

Uniforms designed for the future that pay respect to the past. #LSU125 pic.twitter.com/qmOmdRPlAF

The helmets will change from Purple in normal light to Gold underneath the stadium lights. They also have an oak tree pattern across the helmets which is a nod to the 30 oak trees planted on LSU’s campus as a tribute to the 30 LSU soldiers who lost their lives fighting in World War I.

This clip illustrates how the incandescent Mardi Gras-like colors will change underneath the lights:

LSU will emerge Saturday night from the Tiger Stadium chute in specially designed uniforms that salute the past and pay homage to heroes. #LSU125 pic.twitter.com/GA8L5HSVsf

If I’m a betting man then I’m putting $$$$$ on LSU tomorrow night against Mississippi State. They’re going to be fired up in these unis and they’re still running hot after putting an absolute beat down on Georgia last weekend.

LSU’s a 6.5-point favorite over the Bulldogs with the over-under at 45 points for the game. You can take this information and do whatever you want with it.