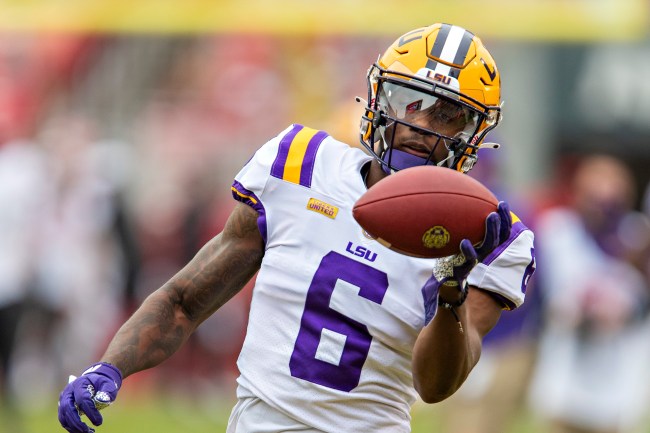 The honeymoon in Baton Rouge is over and LSU’s 2020 campaign has been anything but successful. After winning a national championship as an undefeated program a year ago behind Heisman Trophy winning quarterback Joe Burrow, Ed Orgeron’s team is 3-4 with big losses to Auburn and Texas A&M.

Most recently, the Tigers received another blow on Sunday as their top wide receiver Terrace Marshall Jr. elected to opt out for the remainder of this year and will focus on preparing for the NFL. He is currently listed as the No. 4 prospect at his position by most draft experts and will likely be selected in the early rounds. He has recorded a team-high 731 yards on a team-high 48 catches and accounted for 43 percent of the LSU’s total points.

The NCAA ruled prior to the season that any player could opt out at any point because of the COVID-19 global pandemic. That’s good and well, but the irony comes with Marshall Jr.’s recent message to his team. The 6-foot-3, 200-pound junior isn’t overly outspoken, doesn’t draw attention to himself in the media and goes about his business. So when he speaks up, he has something to say.

After LSU’s 48-11 loss to Auburn, reports surfaced that a group of players went to a Halloween party that contributed to a Coronavirus outbreak within the program. Marshall Jr. asked Orgeron if he could make a statement in the locker room on Monday and took the opportunity to discuss the team’s lack of dedication and effort. He noticed a group of young players writing off the season and wanted people to care as much as he did.

“I just wanted to display a part of my leadership role on the team, try to help motivate the young guys to the old guys,” he said about his impassioned speech. ” We still have a mission ahead of us, we’ve just gotta keep playing.”

Players said that the meeting kept them in the right place and got them refocused. The following weekend’s matchup with No. 1 Alabama was postponed due to COVID-19 protocol and then LSU beat Arkansas before losing to No. 5 Texas A&M this past weekend. After the loss, on Sunday, Marshall Jr. opted out.

“First of all Terrace did come talk to me, like a man,” Orgeron said. “He had a change of heart.”

Marshall Jr.’s final play of his collegiate career in Louisiana was a touchdown that brought the Tigers back to pull a backdoor cover. Legend. Whether he got tired of the teammates around him, or is simply looking out for his best interest in the future, the decision is understandable. Chase that bag. But the timing, considering the speech, induces at least a chuckle.

Has Orgeron lost control of the locker room? It sounds like there may be some trouble in paradise.