J.J. Redick Was Totally Confused By Luka Doncic’s Buzzer Beater, Had No Idea It Was The Game-Winner 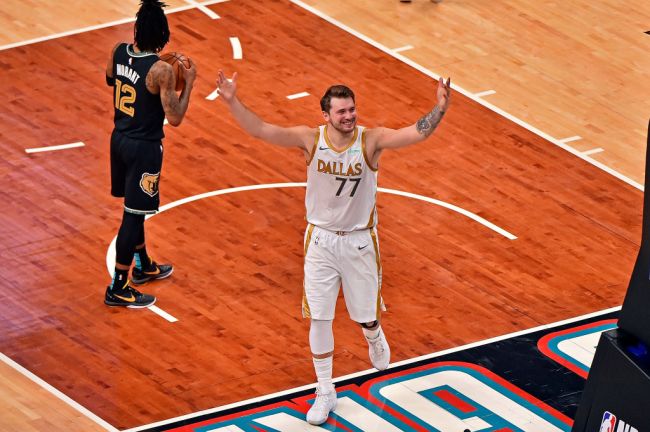 Luka Doncic’s buzzer-beater against the Grizzlies is one of the wildest plays in recent NBA history. Doncic’s shot literally caught everyone off guard, including his new Dallas teammate J.J. Redick.

After Grayson Allen missed two free throws to put away the game for Memphis on the other end, Dallas advanced the ball with a timeout. Trailing by two with 1.8 seconds left, for some odd reason the Grizzlies allowed Doncic to get his hands on the ball on the inbounds pass before he literally ducked under a defender to toss up a floater from beyond the three-point line to give the Mavs the win as the buzzer sounded.

Redick, who was playing in just his second game for the Mavs since being traded by the Pelicans, didn’t realize what had just happened given the overall bizarreness of Doncic’s shot.

“When he shot the ball and the ball went in, everybody on our team ran on the floor like we had just won the game,” Redick said on his ‘Old Man and the Three‘ podcast. “I was confused, because from my angle, it looked like he shot a floater from 14 feet. I had no idea it was a three. And then when they showed the replay, it was — a little in disbelief of how ridiculous that shot was.”

Redick went on to say that it was “one of the most ridiculous shots I’ve ever seen in m life,” which I think every NBA fan would agree with.

Doncic is apparently a pretty big fan of attempting these wild-looking shots as head coach Rick Carlisle told reporters after the game that he actually makes bets on making trick shots during practice and shootaround, and he usually wins them.

“Anytime we walk into practice, and he’s sitting on a table, getting stretched out behind a basket and says, ‘Hey, coach, if I make a shot, it’s no practice,'” Carlisle said. “And I was like, ‘Forget it. No way. He’s gonna make the shot and make shots on me.’ He’s just a very, very special and unique guy when it comes to these kinds of things.”

Doncic truly is a one-of-a-kind player. While his buzzer-beater against Memphis was straight-up mind-blowing, it’s safe to say this won’t be the last time we talk about him hitting some bizarre game-winner.