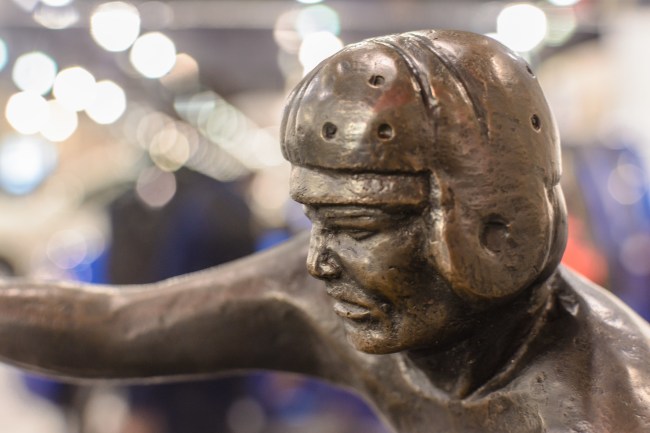 The Florida Gators play the Georgia Bulldogs this weekend in the ‘world’s largest outdoor cocktail party’ which is actually none of those things this year because only 19,000 fans (only!!!) are allowed to attend the game inside of the stadium. The Bulldogs are the #5 ranked team in the nation and the Gators are #8 in the AP Poll.

The Georgia Bulldogs are a 3-point favorite in the game (over/under 52.5) but it’s really a tossup given how strange this season has been. Nobody will be shocked if this game comes down to a final drive and field goal. It feels like this game’s a toss-up because we don’t know enough yet about either team.

Country Music star Luke Bryan is doing his part to help his beloved Dawgs win the game. His wife bid on UF legend Tim Tebow‘s Heisman Trophy and she actually won it. The Bryan’s don’t own the trophy but they get to possess it for six months and Luke’s taken possession of the trophy just before the Florida-Georgia game and put a curse on Tebow’s trophy.

Here’s Luke Bryan on Instagram talking about how he got Tebow’s trophy and has since cursed it.

Game time! @timtebow and I are having some competition this week leading up to the Georgia Florida game. Tune into our stories to watch us cheer on our favorite college teams and highlight our charities. Go Dawgs! @linabryan3 @demitebow @timtebowfoundation @brightforbrett

Now he’s just straight up trolling Tebow with this:

My latest work out routine. Thanks @timtebow. Go Dawgs! @linabryan3 @demitebow @timtebowfoundation @brightforbrett Music: “Eye of the Tiger” by Survivor

The Georgia Bulldogs are coming off a 14-3 win last week at Kentucky which isn’t exactly the confidence-building result you want going into a rivalry game like this. The Gators beat Missouri 41-17 on Halloween after three weeks off. Insider analysis suggests the Gators will struggle because of open-field tackling, they have 7 defenders with at least 4 missed tackles.

But in a rivalry game like this anything can happen and that’s precisely why Luke Bryan has placed a curse on Tim Tebow’s Heisman Trophy which must count for something.