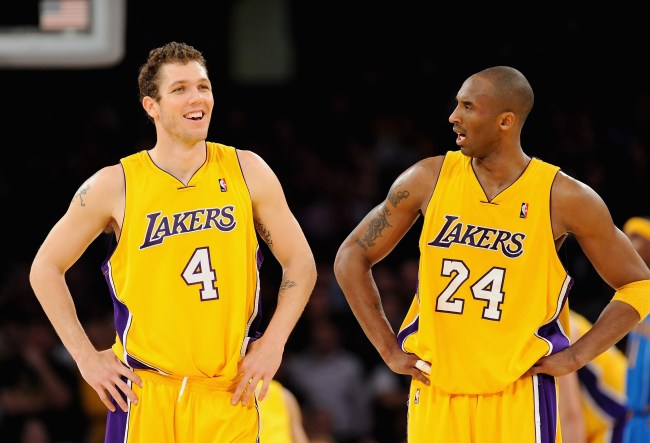 Luke Walton and Kobe Bryant won two NBA titles together with the Los Angeles Lakers, with the former being a solid role player for the Purple & Gold. While Bryant was the superstar who was dominating on the court, because he never went to college — famously entering the 1996 NBA Draft straight from high school — he never had that experience on campus where he played drinking games nonstop with his buddies.

Oh, have no fear, though, because Walton made sure Bryant got to have the experience while they were both teammates on the Lakers.

With the devastating helicopter crash that killed Kobe, his 13-year-old daughter and the seven others onboard, plenty of awesome stories have come out about Bryant’s life. It’s one of the bittersweet things about difficult moments like this, as millions have paid tribute to the icon — and Luke Walton’s included some fun stuff about playing drinking games together.

While talking to ESPN’s Dave McMenamin, Walton described the relentlessness that Kobe had while trying to master the drinking game quarters, which, knowing Bryant’s work ethic, shouldn’t really surprise anyone.

And Walton knew Bryant’s thirst for competition knew no bounds. He recalled teaching Bryant the drinking game, quarters (where you bounce quarters into a cup) on a road trip.

“We’re in the hotel room and he was awful at it,” Walton said with a smirk. “Kobe being Kobe, we kept hanging out and playing and he’s over there at a side table just practicing for an hour straight.”

Although Walton didn’t detail the year this happened, considering the two played together from 2003-12 on the Lakers, Bryant wasn’t some young player doing this, but, instead, an adult. That’s pretty awesome to imagine. Plus, the fact that he was so set on being great at something as stupid as a drinking game only adds to his legacy.

There will never be another Kobe Bryant, and, while we’re all still letting the realization of his tragic death soak in a week later, stories like the one above from Luke Walton reminds us how much we should forever appreciate the greatness of the Black Mamba.