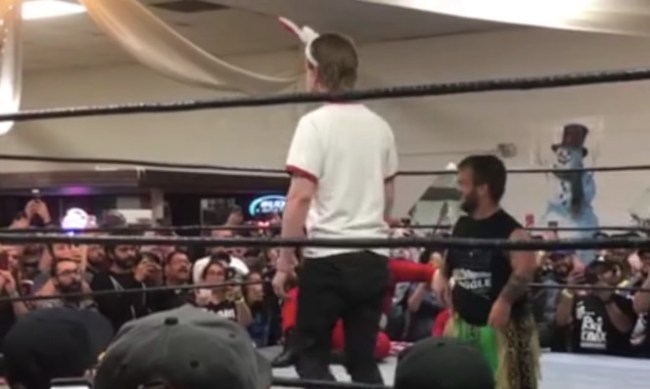 Can you smell what the Culk is cooking (Macaulay Culkin, that is)? Dammit. How is it just now dawning on me that we should’ve been calling him The Incredible Culk all these years? Anyway, I’m getting sidetracked already.

Macaulay Culkin took part in Bar Wrestling outside of Los Angeles last night and busted out some Home Alone antics to sabotage one of the wrestlers before getting in the ring, pushing a dwarf to the ground, and fighting Santa Claus. If this doesn’t you put in the Christmas mood then I don’t know what will.

Twitter users Cynthia Vance and Marc Raimondi captured some photos from what SI’s Extra Mustard is calling one of the best moments in sports for all of 2017…And I have to say, I’m inclined to agree with them. Very few things are coming to mind (in Sports) over the past year that top this:

A "Home Alone" ending to the @BarWrestling Christmas Special! pic.twitter.com/LsSUrAHmjc

If that wrestler that Macaulay Culkin pushed to the ground looks familiar it’s because he’s Swoggle, aka Hornswoggle from the WWE. He’s had a very successful career in the wrestling ring, and in September 2007 it was revealed on an episode of Raw that he was Mr. McMahon’s illegitimate son. Honestly, you owe it to yourself to click that link and read up on Swoggle’s Wikipedia page if you’re not a diehard wrestling fan. I’m not a devoted wrestling fan and going down the rabbit hole of his Wiki page just now was one of the most fun things I’ve read this week.