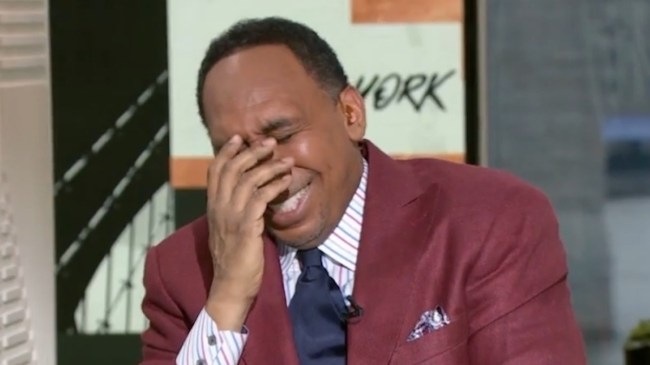 ESPN’s morning debate show First Take has devolved into pure theaters. There’s simply no denying that at this point.

But if you take it for what it is, particularly when New York City radio legend Chris “Mad Dog” Russo is in the guest’s chair, the entertainment value is undeniable.

Take Wednesday’s episode of First Take, for example, which saw a maroon-suited Smith have a meltdown after Mad Dog decided to speak like a pirate and suggest that the Chicago Bears seek to “improve their draft booty.”

The debate was about what the Bears — who already have Justin Fields at the quarterback position — should do with their #1 overall pick in this year’s draft. Given that they might not be interested in taking a quarterback, there’s an argument that they should trade down and try to acquire additional picks in return.

As for why the Bears might not be interested in taking a signal-caller, it’s because Fields — who was selected with the fifth overall pick in the 2021 NFL Draft — showed signs of developing into a franchise quarterback this year.

Despite playing at the heart of a terrible Bears team, Fields completed 60% of his passes for 2,242 yards, 17 touchdowns, ad 11 interceptions. He also rushed for a staggering 1,143 yards and another eight touchdowns.

Rounding out the Top 5 picks in the 2023 NFL Draft are the Houston Texans, Arizona Cardinals, Indianapolis Colts, and Seattle Seahawks (via their now-infamous trade with Denver for Russell Wilson).

According to NFL Drat analysts, there are three quarterbacks that could be selected in the Top 10 picks this year: Alabama’s Bryce Young, Ohio State’s C.J. Stroud, and Kentucky’s Will Levis. The 2023 NFL Draft will be held in the plaza outside of Union Station in Kansas City, Missouri, and will begin on April 27.

RELATED: Stephen A. Smith Is Literally Taking Personal Credit For The Downfall Of The Dallas Cowboys This Season