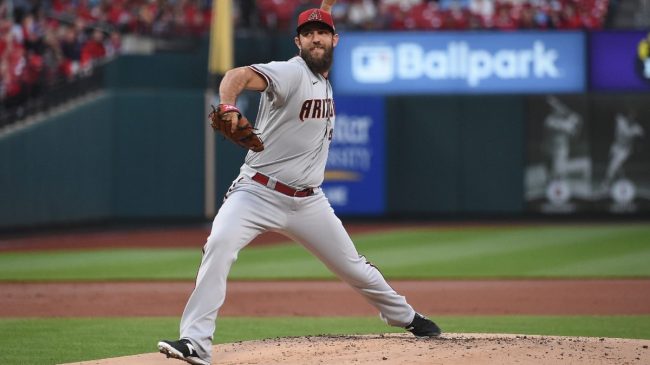 Arizona Diamondbacks pitcher Madison Bumgarner was not a happy man on Wednesday.

The lefty threw just one inning of work before being tossed by an umpire, sparking an on-field altercation. The appearance was easily his shortest of the season so far.

The veteran is experiencing a bounce back year in 2022, having allowed just three earned runs over 23 innings of work upon entering today’s matchup. He allowed one run on Wednesday before the ejection.

It seems he was originally upset with the home plate umpire for missing a call during that first frame. He exchanged a few words with the man behind the dish, but it was the first base ump that officially ended his day.

While coming off the mound, Bumgarner and the blue engaged in a bit of a staring contest as he got his hands checked for the sticky stuff. A quick word was said before the pitcher was thrown out.

That’s when things got dicey.

Madison Bumgarner lost his mind on an umpire and was tossed from the game after pitching one inning pic.twitter.com/jmyUmV7Cbd

If you’re reading lips, it appears Bumgarner said something to the tune of, “I will f— you up!”

After getting that left hand as close to the ump’s face as possible without actually making contact, teammates and coaches pulled their pitcher back.

Bumgarner then leaps back towards the man in blue while trying to break free of his teammates’ grasps. Luckily, to no avail.

It’s been a testy series thus far for the Diamondbacks. On Tuesday, manager Torey Lovullo was tossed after arguing a foul ball play. Less than 24 hours later, his star pitcher received an early exit.

Bumgarner will have to watch the rest of this one from the clubhouse. We’ll see if the MLB has any further punishment for the ace moving forward.