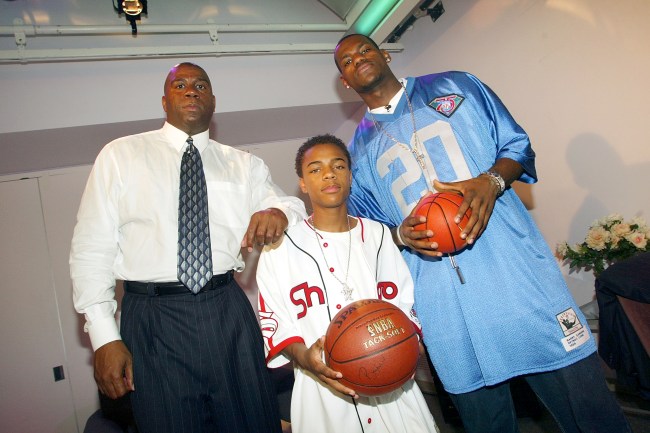 Two weeks ago, Magic Johnson said he’d relinquish his position of Los Angeles Lakers president of basketball operations if he didn’t ‘deliver’ over the next two summers. Days later, the hoops icon arrived to the LeBron James pitch meeting an hour before free agency started at 9:01 p.m. PT on June 30.

“I was going to sit outside for an hour until it was my time to go up to his home,” Johnson told SpectrumSN.

Johnson, one of the most charismatic sports figures ever, claims he immediately connected with LeBron in the meeting and was able to recruit him to play for a team that hasn’t made the playoffs since the 2012-13 season.

“We had a great time of going back and forth, here we are two guys, similar. Both from the Midwest. Both grew up poor. Both love to compete. Both love to win, and I think both excel at the highest level. We connected right when I walked in the door. Just two guys that talk free to each other, and talk basketball, and that’s what I love about LeBron.” [via ESPN]

Johnson and Lakers general manager Rob Pelinka spoke to Spectrum SportsNet about the signing on Tuesday, with Pelinka calling him a “basketball savant.”

Magic Johnson on his meeting with LeBron:

“The thing I was really impressed with was he knew every single guy, their strengths and weaknesses, on our team, and he was really excited about how the young guys performed last season.”

Rob Pelinka on the types of players they want around LeBron, as detailed on “Connected With…” exclusively on @SpectrumSN, airing right now. It’s Rob and Magic next to @geeter3 and @Mike_Bresnahan: pic.twitter.com/S553UFGM4u

Rob Pelinka said he received a text from James’ agent, Rich Paul, at 4:30 p.m. the next day.

“The text just said ‘Congrats,’ and it had balloons,” Pelinka said. “It was one of those moments in life you’ll never ever forget. Everything went in slow motion.”