Magic Johnson Reveals Reasons Why He Stepped Down As Lakers President 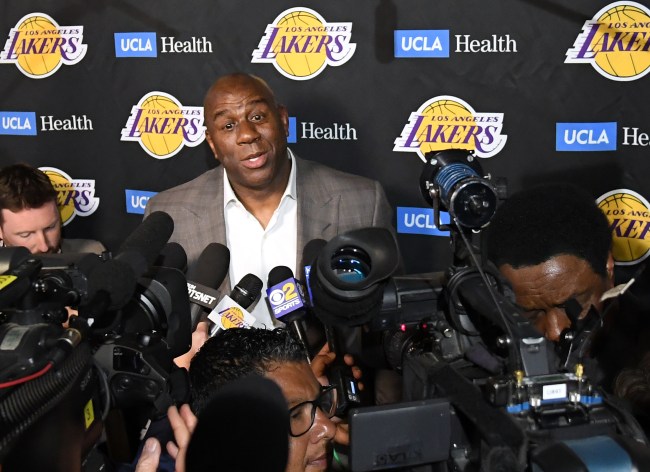 Magic Johnson stunned the NBA world tonight when he announced that he was stepping down as Lakers president.

Magic Johnson has stepped down from President of Basketball Ops of the Lakers.

Magic Johnson and Rob Pelinka visited with LeBron James and agent Rich Paul on Saturday, league sources tell ESPN. Johnson offered no indication that he was on the brink of bailing on the Lakers, sources said.

Magic conducted an impromptu press conference and revealed that he felt restrained in the job with the Lakers and just wanted to go out and mentor players.

Spoke to Magic Johnson 1-on-1 after his shocking resignation and asked him if he owed it to Jeanie Buss to have called her personally to tell her he was leaving. We also talked about why he did it and how he feels now –
Will air on @SportsCenter tonight & then in full on #TheJump pic.twitter.com/ce0bXfhLQ4

Apparently Magic just wasn’t really too into having a day job.

Since taking over as president of the Lakers, Magic Johnson never fully committed to the job. Often he was traveling and away from the team. His office hours were limited. He didn't do a lot of scouting. Running an NBA team takes a tremendous commitment of time and energy.

Earvin, I loved working side by side with you. You’ve brought us a long way. We will continue the journey. We love you 💜💛 https://t.co/ofmQl6BtBz