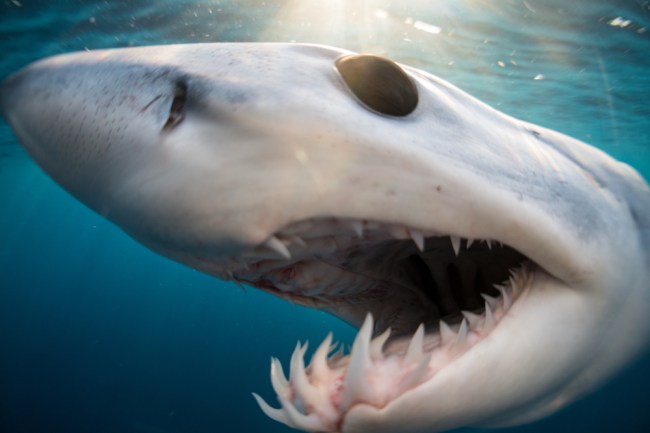 Mako Sharks are a pelagic species and can be found in oceans all across the world. But just because they can be found all over the globe it doesn’t mean you’re likely to see them everywhere. If you are fishing for Mako you might want to head to Long Island or Southern California.

One place you wouldn’t head out expecting to encounter a mako shark is off the coast of Clearwater Beach in Florida. The Gulf of Mexico is relatively shallow in the greater Tampa Bay area. You have to head 50 miles offshore to get into just 100-feet of water whereas on the East Coast of Florida you can go five miles out and be in several hundred feet of water. This has a big effect on which types of species prowl the waters, so when a local charter fishing boat out of Clearwater ran into a MASSIVE mako shark with crazy ass teeth they were shocked.

The footage below shows what it was like to hook into this monster which popped up out of nowhere:

The Bradenton Herald reports that it all started with the crew catching some Amberjack and a nice Blackfin Tuna which the Real Coquina Key Fishing crew planned to bleed out and eat as sashimi. With all of the blood from the tuna in the water the mako shark showed up looking for an easy meal so they tossed it a cut-up Bonito fish and that’s when all hell broke loose as you saw above.