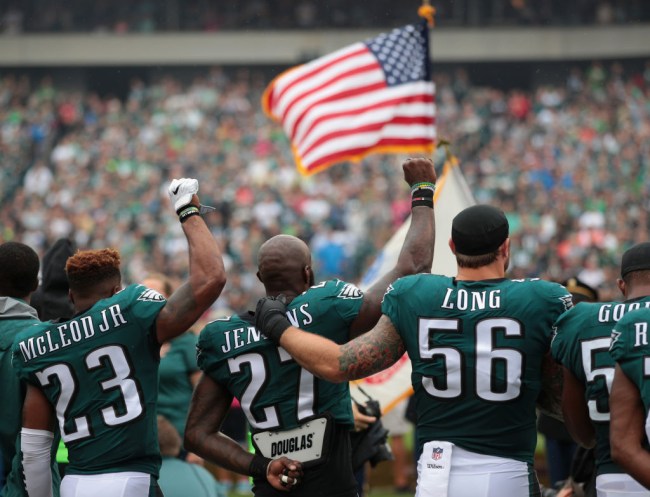 Here is the official statement from the White House.

“The Philadelphia Eagles are unable to come to the White House with their full team to be celebrated tomorrow. They disagree with their President because he insists that they proudly stand for the National Anthem, hand on heart, in honor of the great men and women of our military and the people of our country,” Trump said in a statement.

Today, Eagles safety Malcolm Jenkins responded to the President’s statement by detailing the efforts taken by himself and other player in the league to help improve their communities while also making sure to let President Trump know that none of the Eagles kneelt for the anthem during the regular season or postseason in 2017.

Chris Long played for free last year and donated his entire salary to charity. We’ve fed the hungry, we’ve mentored our youth, we’ve fought to create opportunities and individuals who have been disenfranchized we’ve given scholarships, and the list goes on

Simply google: how many Philadelphia Eagles knelt during the national anthem last season?. and you find that the answer is zero. A similar google search will show you how many great things the players on this team are doing and continue to do on a daily basis.

Instead the decision was made to lie and paint the picture that these players are anti-America, anti-flag, and anti-military.

Early this morning Fox News was forced to apologize when they ran a piece about Trump cancelling the Eagles White House visit that implied that Eagles players had protested the anthem by kneeling when in fact they actually praying.

This is shameful — even for Fox News pic.twitter.com/lF3PCQ62Y2

Imagine wanting to please the boss so very badly that you run stills of guys knelt down PRAYING during pregame. Not one Eagles player knelt for the anthem this yr. Keep carrying his water to sow division while misrepresenting Christian men. Aren’t many of your viewers.. nevermind https://t.co/QdlOvL0btq

"During our report about President Trump canceling the Philadelphia Eagles trip to the White House to celebrate their Super Bowl win, we showed unrelated footage of players kneeling in prayer." (1 of 2)

"To clarify, no members of the team knelt in protest during the national anthem throughout regular or post-season last year. We apologize for the error." -Christopher Wallace, Executive Producer of FOX News @ Night with Shannon Bream (2 of 2)