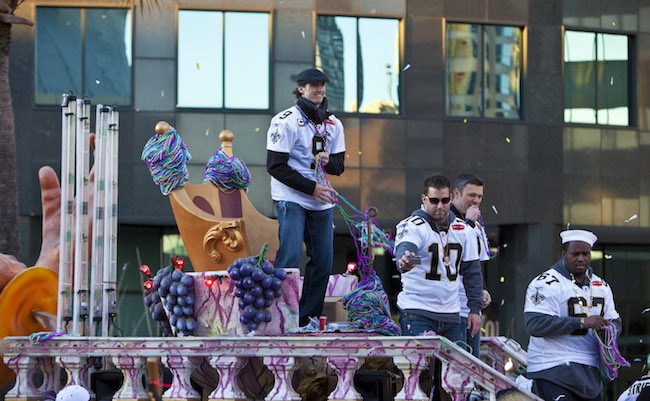 New Orleans is practically unparalleled when it comes to throwing parades that are basically just an excuse to drink copious amounts of alcohol in public, so when the Saints gave the city a chance to pregame Mardi Gras with a procession following their victory at Super Bowl XLIV in 2010, it didn’t take too much convincing to get people to come out and celebrate.

However, there was one group of partiers who almost missed out on the chance to take advantage of a rare excuse to start drinking in public before noon in the middle of the week: the Saints players responsible for the parade being held in the first place. Current Philadelphia Eagles safety Malcolm Jenkins recently sat down with GQ to discuss a wide variety of topics, including how he rectified the situation by giving a police officer hundreds of dollars to track down booze for the team.

“I just assumed that there’d be alcohol or something on the floats. And then it was like the streets are closed so we can’t even make a quick run to get it. So we gave an officer like $700, he turns his lights on, leaves, and comes back with like two boxes of stuff for us… He was back like 20 minutes later. That didn’t take much convincing. Not in New Orleans.”

The CB also revealed he didn’t take any chances during his most recent Super Bowl parade with the Eagles, as he arrived at the festivities with three cases of Martell cognac in tow despite the team telling players they weren’t allowed to drink.

Some rules are made to be broken.