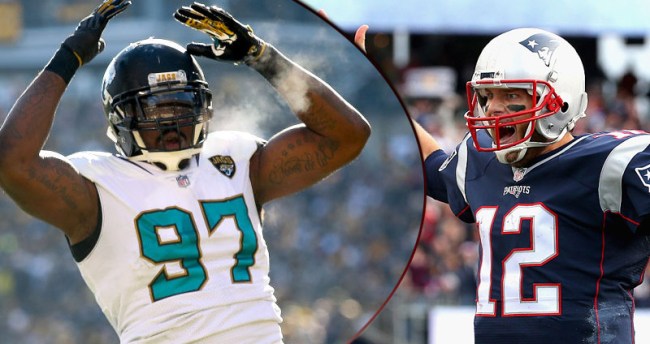 Jacksonville Jaguars’ star defensive lineman Malik Jackson says he isn’t buying the Patriots’ reports that Tom Brady has an injury to his throwing hand. I know, hard to believe that someone wouldn’t believe what the Patriots’ put on their injury report. It’s not like they’ve ever told a white lie or two on it before. Oh, wait…

Jackson, however, has one other reason, besides the Patriots’ tomfoolery to think that maybe Tom Brady isn’t really as injured as reports are making him out to be.

Speaking to Mike Florio on PFT Live, Jackson reminded us of another star player who was supposedly questionable to play against the Jaguars in the playoffs this year.

“I remember [Bills running back] LeSean McCoy said he had a high ankle sprain and came out there cutting and stuff,” Jaguars defensive lineman Malik Jackson said on Thursday’s PFT Live, in reference to McCoy’s status before the wild-card game between Buffalo and Jacksonville. So Jackson said he’ll assume that Brady will be the same old Brady.

Regardless of Brady’s status, Jackson believes that the Jaguars can slow the New England offense, if they follow the right formula.

“We have to go rush the quarterback,” Jackson said. “Also we have to make sure we press the pocket up the middle because he likes to step up in the middle or that’s where he feels comfortable standing behind that center. That’s what I told our [defensive] line. We have to make sure that we create pressure, have to rally and tackle and just frustrate him. He is 40, so we can hit him.”

As for whether Brady is really injured or not, he reportedly practiced on Thursday wearing a glove on his right hand.

“If this was a major emergency in the sense of Brady’s availability was in question, it certainly makes sense to think they would have tried to rush another quarterback in here,” Reiss told WBZ host Adam Kaufman. “So when you frame the context of it, you say, Brady’s going to play, the question is more, how effective will he be?

“Tom Brady is as tough as they come, and this’ll be one on the list of many things that he’s fought through to play through.”

Also on Friday morning, Patriots coach Bill Belichick, in a not-even-remotely shocking bit of news, pretty much dismissed any talk of Brady being hurt.

When asked about Brady’s status, The Hoodie’s first response was, “We gave out the injury report yesterday and we’ll update it today.” Then when asked if Brady would be a game-time decision, Belichick replied, “Today is Friday.”