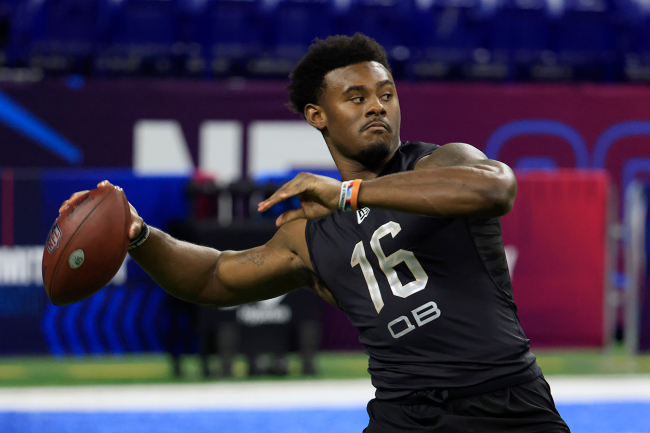 Former Auburn transfer turned Liberty starting quarterback Malik Willis has made himself a lot of money in Indianapolis this week. The 22-year-old Georgia-native is considered by many to be the top NFL prospect at his position and has lived up to the billing at the NFL Combine.

For starters, Willis was seen outside of the Combine giving a man in need the shirt off of his back. It was an incredible candid moment that makes him the most well-liked quarterback in the draft class by a large margin.

As for his physical intangibles, he measured well.

He also performed well on the Wonderlic Test.

From NFL Now: On the QB interviews, how Desmond Ridder and Malik Willis have both stood out and why Willis' brain (with an impressive 32 on the Wonderlic Test) has made an impression. pic.twitter.com/YbMsFJfJzT

From there, he proceeded to put on a show.

Willis wants to make it very clear that he sees himself as a quarterback on the next level and chose not to participate in any of the scouting drills except the throwing portion. It was about his arm.

During the on-field drills, it was very clear that he has a natural and effortless ability to sling the pill. He was throwing lasers.

Once the quarterbacks got to open up, Willis unleashed the cannon.

Some of his wide receivers couldn’t even keep up.

Willis’ best throw of the night was an absolute dime and everybody in the building had their jaws dropped as he put a nearly 70-yard throw right on the money.

An absolute BEAUTY of a throw from @LibertyFootball
QB @malikwillis 😮

He even impressed himself. An alternate angle of the throw shows Willis let it rip and then stand there admiring his work. He knows it’s perfect. He knows it’s beautiful.

The video is ice cold. Willis didn’t celebrate, he didn’t say anything, he just stood there and watched his pass land perfectly into the outstretched arms of his receiver and then lined up for the next rep.

There are quite a few teams that may be in the market for a quarterback and Willis is continuing to skyrocket up draft boards. His Thursday at the Combine was impressive.