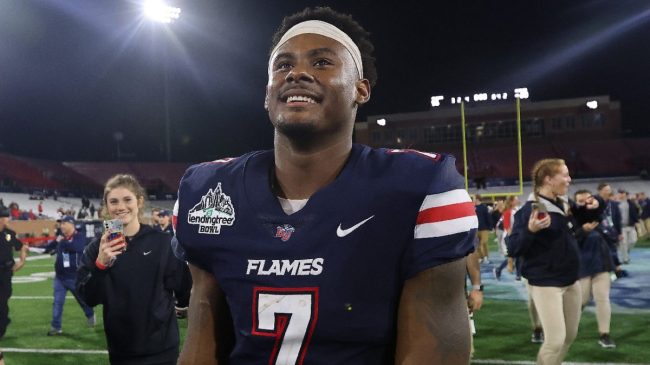 It’s easy to do the right thing when the cameras are on you but when the lights are off, your true qualities are revealed.

We got insight into the character of one future first-round pick on Thursday.

Malik Willis is in the process of preparing for his NFL future at the Combine this week. The former Liberty star is set to be one of the top two signal callers taken off the board come draft day.

Throughout the interview process, Willis has seemed like a top-notch person and his abilities on the field have spoken for themselves throughout his collegiate career.  The passer threw for more than 5,000 yards with the Flames, accounting for 47 touchdowns through the air.

But his on-field performance isn’t what has people talking about the young star this week.

Willis was seen handing clothes to someone on the streets of Indianapolis Thursday in a random act of kindness. Unbeknownst to him, the quarterback’s tremendous generosity was being filmed from a distance.

Social Media Was Blown Away By The Kind Act

As expected, the reaction on social media was extremely positive. An already likeable player has now become an even more likeable person.

Character can be defined by what you do when you think nobody is watching… https://t.co/d7XuSqBY92

I want this man on my team! https://t.co/HhCtp6Wvyl

It still costs $0 to be a kind person. Good job Malik ❤️ https://t.co/ORQihBCY8i

The act may not affect his draft stock, but judging by the video, I don’t think Willis cares.