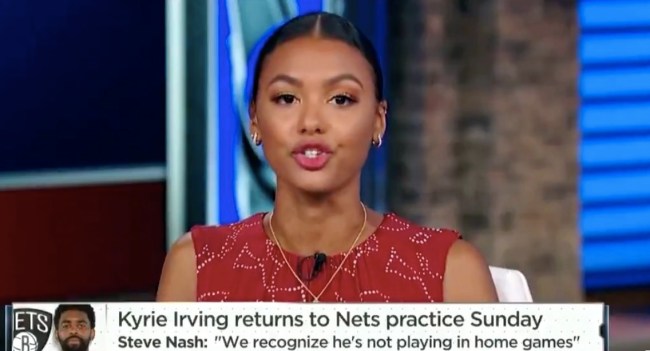 Following ESPN’s removal of Rachel Nichols from air and cancellation of her NBA show The Jump, Malika Andrews — the network’s only black female NBA reporter who became a star during the network’s coverage of the NBA Bubble in 2020 — was effectively made the face of their NBA coverage going forward as she was tapped to host ESPN’s new daily basketballs show, NBA Today.

Andrews, serving as host of ESPN’s pregame show prior to the Los Angeles Lakers vs. Phoenix Suns preseason game on Sunday, was speaking with analyst and former NBA pro Kendrick Perkins when she called out Kyrie Irving for thinking he has “the privilege of just looking at yourself” during a pandemic.

“I asked Kevin Durant on his thoughts about Kyrie, he said it was a ‘individual choice’. I understand in some ways taking that approach or maybe that’s just what you say facing forward, but that is the antithesis of what a pandemic is. You do not have the privilege of just looking at yourself,” Andrews said.

“You have to look at the people next to you because that’s how we got to this being the most deadly pandemic that has killed over 700,000 people in the United States. That’s not all on Kyrie, but it’s on all of us to do our small part and his small part is in that locker room.”

Malika Andrews with the 💯 on the Kyrie Irving situation:#NBATwitter pic.twitter.com/dYeFR2FG7X

Andrews’ comments come as Nets head coach Steve Nash conceded over the weekend that the team will be without Irving at home games this season:

“I think we recognize he’s not playing home games. We’re going to have to for sure play without him this year. So it just depends on when, where, and how much,” Nash said of the Flat Earth Theory-believing Irving, who’s in the midst of a 4-year, $136 million contract with the Brooklyn Nets.

The Nets are currently scheduled to kick off their 2021-2022 season on the road at the defending champion Milwaukee Bucks on Tuesday, October 19, meaning part-time employee Irving will likely be with the team for that one (if he feels like it).