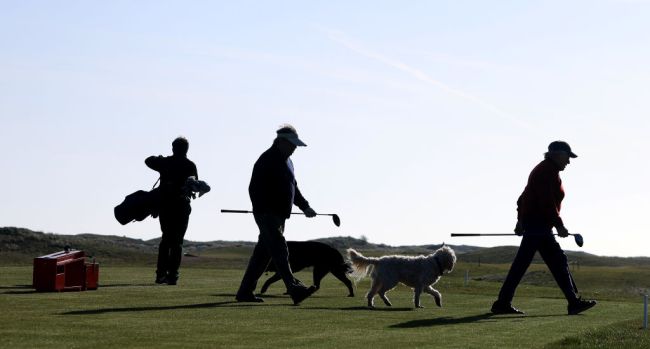 Golf is just a game and golf balls are replaceable, but apparently, Salil Zaveri didn’t know these things.

Zaveri was arrested on suspicion of killing a dog for taking his golf ball during a round at Wyndham Grand Rio Mar. Puerto Rico police posted a statement and photo on Facebook of the 60-year-old being handcuffed on the course.

According to ABC News, a dog stole Zaveri’s golf ball on the 17th hole in which he reacted by grabbing a 9-mm pistol and fired several gunshots at the dog. He was released on a $60,000 bond, but his drivers license and passport have been seized, according to reports.

Zaveri told the Daily News that he shot the dog in self-defense and claimed the golf ball was his friend’s, and that the dog was chasing after him trying to get into his golf cart.

Do you mean to tell me that the dog was intrigued by a ball? Who knew dogs liked playing with balls? This must have been some sort of strange breed that really enjoys having fun.

“I took the first shot when the dog was less than 10 feet away and the dog rolled over but may have died slowly so I got out of the cart and took two more shots out of mercy,” Zaveri said.

What a disturbing quote that is. He shot the dog, got back in his golf cart, realized it was struggling, stepped back out of the golf cart, and put it out of its misery. What the hell was everyone else on the golf course thinking as multiple gunshots were being fired off? Better yet, what were his playing partners doing witnessing this insane act of violence?

“Thank you to MY police officers, who today were the voice of justice of a puppy, whom an unscrupulous, killed viciously, for no reason and in a clear disregard for life,” police commissioner Antonio Lopez Figueroa said in a statement.

Zaveri is expected to appear in court later this month.