Man City Fan Takes Dementia-Suffering Grandfather To Final Game Of The Season, ALL The Emotions Ensue 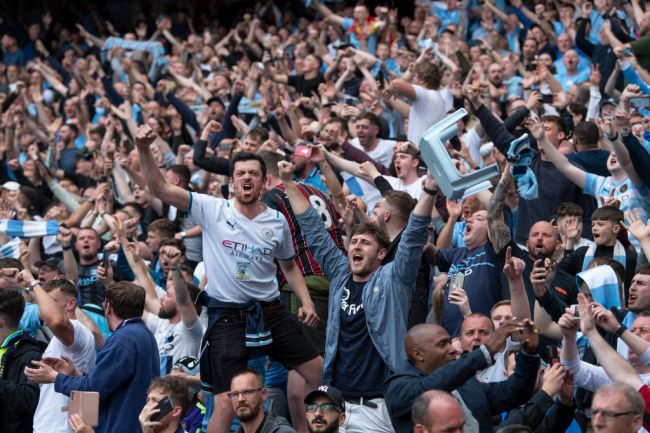 There is not a single sports organization on the planet that I despise more than Manchester City. Whether it be the blood that fuels their bankroll or the arrogance of its coach, I’ve never encountered a sports team that I truly and deeply hate so thoroughly. It also doesn’t help that City has beaten my favorite team, Liverpool, to the Premier League title quite a few times over the last few years.

Still, despite the fact that I may hate the club itself, there’s no denying that the team’s supporters — its fan — are just regular old soccer fans, just like you and I. And that brings us to the point of this article: the beauty of the game that all fans experience, regardless of what team they root for.

Last Sunday, Manchester City bagged their fourth league title in five years in epic fashion as they came back from a 2-0 deficit to beat Aston Villa by a score of 3-2. Even for a City-hating football fan like myself, it’s impossible to admit what they pulled off wasn’t incredible.

And, again, even as a Liverpool fan, it’s impossible to admit that the below video of a young man bringing his dementia-suffering Grandfather to the game isn’t what the sport is all about.

So, shout out to this guy, because while Manchester City may be a disease that’s further infecting the game with each passing year and is essentially the antithesis of what football should be, this dude and his Grandad are very much what the game is all about. You’ll never walk alone.