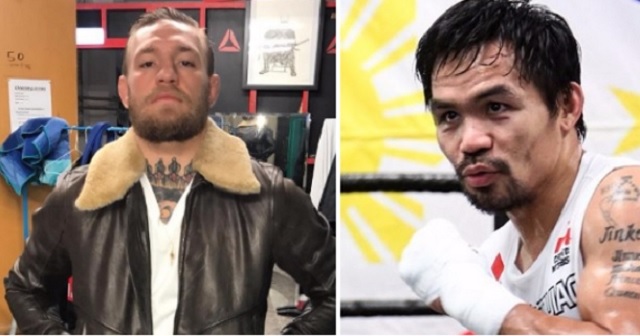 Question for ya bro: What do you, me, and Conor McGregor have in common? Answer: None of us have ever, in our lives, competed in a professional boxing match. Floyd Mayweather, on the other hand, literally became the richest athlete on the planet and fought himself into the conversation of ‘greatest boxer to ever live.’

In all likelihood, on August 26 in Las Vegas, Conor McGregor will end up just like Mayweather’s other 49 opponents throughout his illustrious career: in the losing corner. Boxing great Oscar de la Hoya claims that McGregor shouldn’t even be licensed to box.

Manny Pacquiao is the latest boxer to deem this fight a sideshow.

“McGregor has no chance in this fight,” Pacquiao said. “In fact, it could be very boring. … There is no way he will be able to land a meaningful punch on Floyd. How could he? He has no professional experience in boxing.”

“The real fight and the best fight is Golovkin vs. Canelo,” Pacquiao said. “The best vs. the best. That’s the fight I will be watching.”

Pacquiao is a great boxer, but his opinions I have to take with a grain of salt. After all, we’re talking about the same dude who claimed that gay people are worse than animals. Also, Pacquiao must have a short memory to call the fight potentially ‘boring.’ He must’ve forgotten his patty cake fight against Mayweather back in 2015 that failed to live up to the hype and 4.6 million pay-per-view buys.