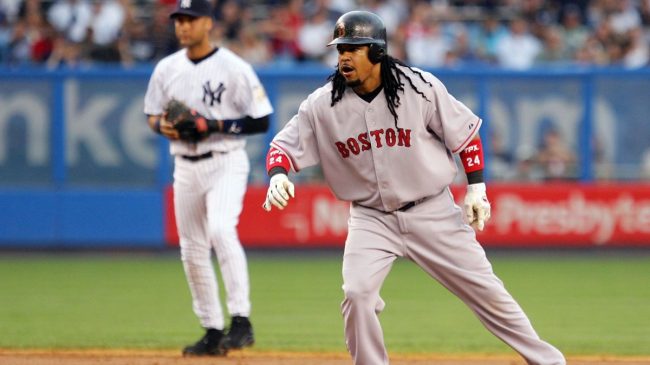 Some Yankees fans are a little testy after a quote from a former Red Sox outfielder was floated around social media on Tuesday morning.

Manny Ramirez joined the Boston broadcast booth Monday night for their matchup against the Detroit Tigers. While on the air, he commented on the fans at Fenway Park and how they can motivate players to reach their potential.

Of course, the consistent pressure to perform can have an adverse effect, too, but each player responds differently.

Ramirez compared Boston to New York in the sense that the environments and expectations call for the best. He said that if you’ve never played in Boston or New York, then you’re not in the big leagues.

The comments were meant as a compliment to two of the biggest brands in baseball, but one quote has grabbed the attention of social media users.

"If you put Derek Jeter in Kansas City, he was just a regular player"

“If you put Jeter in Kansas City, he was just a regular player.”

Ramirez said that if Derek Jeter was not in New York, he would’ve been thought of as just a regular player. Out of context, it certainly sounds like a slight, but the former Boston star was actually complimenting his rival.

“If you haven’t played in Boston or New York, you’re not in the big leagues. It’s like, if you put Jeter in Kansas City for all these years, he was just a regular player. [You put him in New York] and he’s the greatest.”

He goes on to say that playing for the Red Sox or Yankees makes you the best because the fans demand the best.

He’s got a point, too. Jeter’s legacy would be much different if he spent his career losing 100 games a year in Kansas City. Instead, he played on the biggest stages, and came out on top.

Ramirez said the same of himself during his time in Cleveland.

As it goes, Jeter is largely remembered as one of the best to ever play. He can certainly thank the Yankees for playing a part in his storied career.

Related: The Yankees have been almost unbeatable since Derek Jeter joined Twitter