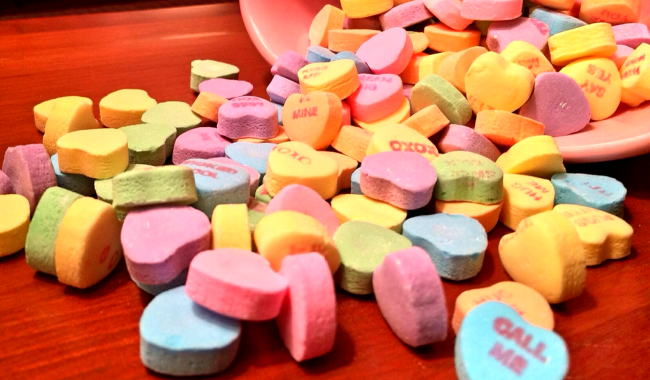 After Americans set a new record of $2.4 billion spent on Valentine’s Day candy in 2020, things went a little south in 2021 (for obvious reasons).

This year, however, expected candy sales volume is back up and expected to reach $2.2 billion – the second most ever spent on candy for Valentine’s Day in a single year in America.

This is good news, because Valentine’s Day was basically canceled in 2021 because for the first time in 153 years Sweethearts candy conversation hearts weren’t available because the company that made them, New England Confectionary Company (Necco) went out of business.

The company that bought Necco, Spangler Candy Company, didn’t have time to produce the conversation hearts in time for Valentine’s Day. That is not a problem in 2022! 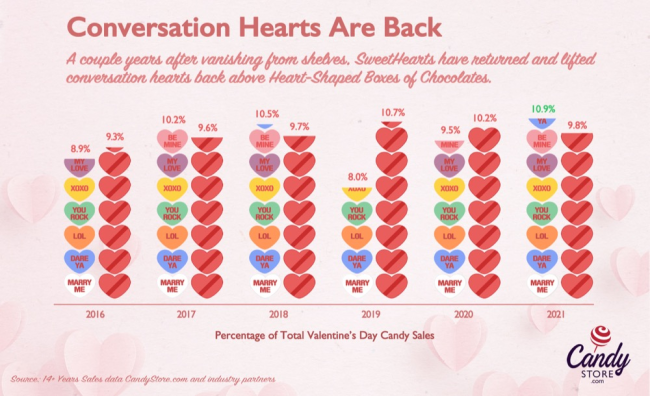 Using 14 years of bulk candy sales data, the folks over at CandyStore.com were able to calculate a state-by-state ranking of favorite Valentine’s Day candy including the top three candies in each state.

Here is just some of what they discovered…

• The number of people buying candy is expected to be at a new record high.
• 56% of consumers planning to buy candy for Valentine’s Day.
• 58 million pounds of chocolate are bought during Valentine’s Day week.
• Cupid corn simply will not go away.

That’s right. The abomination that plagues us each year around Halloween, candy corn, took over the top spots in Nebraska and West Virginia with its special pink-colored version.

What Valentine’s Day candy is the most popular overall?

Outside of those two states, many actually have made excellent candy selections. Others? Not so much. (Looking at you, Nebraska and West Virginia.)

• 16 states including Connecticut, North Carolina, and Tennessee prefer a good ole heart-shaped box of chocolates – the most states for any single candy choice.

• Outliers were chocolate roses in Wyoming and Kentucky, chocolate hearts in Maine, Montana and Rhode Island. Then there is Alabama who still prefers candy necklaces.

Take a look at the map below and see which candy your state prefers the most. 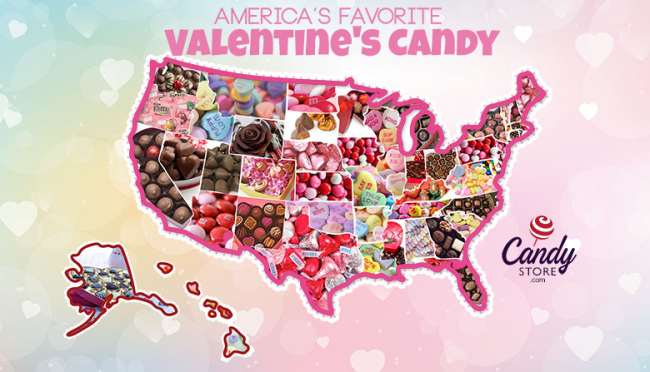 View an interactive version of the map here.