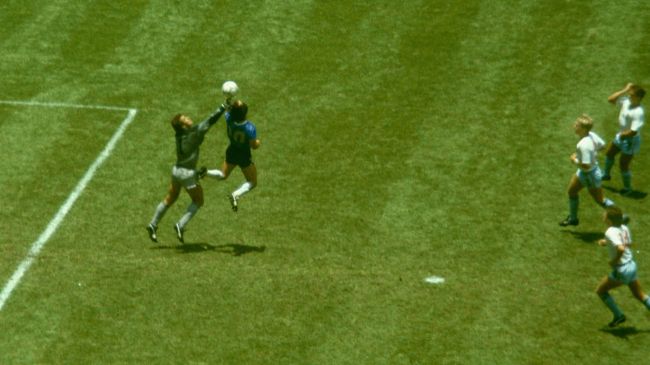 Here’s how truly astounding the legacy of Diego Maradona is: most people actually don’t realize that, mere minutes after scoring his infamous “Hand of God” goal against England in the 1986 World Cup, Maradona scored what’s known as the “Goal of the Century.”

The man literally created two iconic moments of footballing history in the same game. These are sounds and images that will reverberate for generations and they happened over the course of five frenzied, frantic footballing minutes.

Maradona’s “Goal of the Century”

The first of those two goals, though, has the greater reputation given its devious nature, as the game-winning goal was quite literally scored with the one part of the body you’re not allowed to use in soccer: the hand.

Earlier this week, the Argentina kit that Maradona wore on that legendary day was sold at an auction for an astounding $9.3 million, which marks a new record for a match-worn sports jersey. To put into context just how much money that is, Conor McGregor recently showed off his brand-new Lamborghini superyacht, which Forbes says cost around $3.6 million.

According to Casino.org, the Original Olympic Games Manifesto previously sold for $8.8 million back in 2019, which would also make Maradona’s kit now the most expensive piece of sports memorabilia of all time. In third place comes a game-worn Babe Ruth New York Yankees jersey that sold for $5.64 million.

Given the legacy of Maradona across the entire world — he’s widely considered to be one of the Top 3 best soccer players to ever live — it’s difficult to imagine which piece of sports memorabilia currently floating around out there could possibly top this kit’s whopping $9.3 million selling price.

RELATED: Even The Hopes Of Millions Couldn’t Outweigh The Demons That Diego Maradona Carried