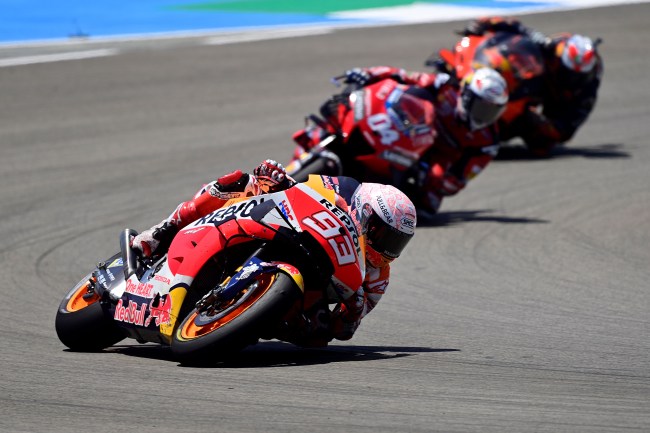 Spanish rider Marc Marquez is on track to be one of the greatest motorcycle racers in history. He’s won 6 of the last 7 MotoGP Championship titles (56 total wins, 95 podiums). He’ll now be sidelined for a chunk of 2020 after MotoGP has resumed.

His race on Sunday in the Spanish Motorcycle Grand Prix was anything but ordinary. While flying around the track at speeds of up to 220MPH he lost control only four laps into the race and went flying off into the gravel. Somehow, he was able to pull off a miraculous recovery and get back into the thick of things.

There are two video clips here from the 2020 Spanish Motorcycle Grand Prix, the first one is his miraculous save just a few moments into the race. The one down below is of his terrifying crash.

He’d dropped down to 16th place after losing control but with just a few laps remaining he was able to climb all the way back to 2nd place. Then came a brutal crash that was quite difficult to watch for racing fans. He broke his arm and I don’t think it’s unfair to call it shattered. He will now have to undergo surgery to repair the break and any possible nerve damage or other damage that might’ve been caused by the crash. And it’s completely unclear how this injury + recovery will affect his career going forward.

Here’s the footage of that crash that snapped his arm like a twig after he’d clawed his way all the way back to second place, fighting tooth and nail along the way after dropping to 16th. This happened with only four laps left in the 25-lap Spanish MotoGP:

😱 @marcmarquez93 will undergo surgery after this horrendous crash at Jerez!

We wish the world champion the very best in his recovery! 💪#SpanishGP 🇪🇸 pic.twitter.com/BOSmDo7dfG

Marc Marquez finished the 2019 season with 12 wins and 420 points (151 points ahead of the second place racer). He won his 6th premier class championship and 8th world championship and he did all of that after undergoing shoulder surgery before the season. He also went through post-season surgery after last season. So his body has taken on A LOT over the past 18 or so months.

Sometimes things don't go as you expect but the most important thing is to get back up and move on. I hope you enjoyed the comeback! Now I'll have an operation to fix the fracture of my right humerus. I promise you all that I will come back as soon as possible and even stronger💪🏼 pic.twitter.com/5FCIamVZLx

How anyone can ever get on a motorcycle without a helmet and protective leathers and boots is simply beyond me. You are already so exposed out there even if you take every possible precaution. But just try and imagine what his skin would’ve looked like had he not been wearing all of that protective gear.

The entire MotoGP world is wishing him a speedy recovery.

MotoGP released this collection of the Top 5 Moments from the 2020 Spanish MotoGP if you want to catch the rest of the highlights:

I really need to be watching more of this sport.