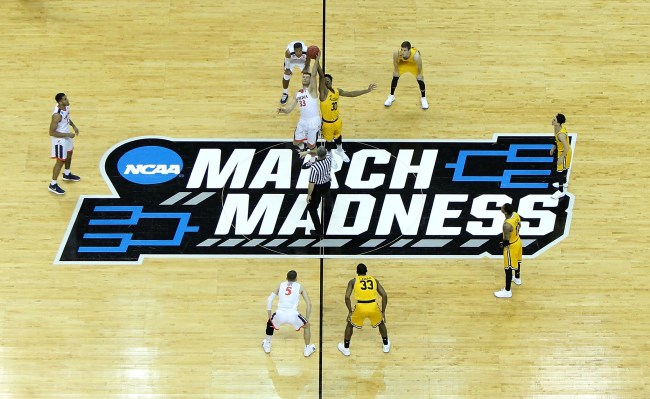 March Madness was cancelled due to the coronavirus concerns — which makes sense, given thousands of student-athletes, families, friends, fans and media would be traveling to numerous arenas around the country to watch onsite — but the NCAA did, reportedly, make one last-ditch effort to try and save the best postseason in all of sports.

That’s according to NCAA vice president of men’s basketball Dan Gavitt, who spoke with the Associated Press about an idea that was floated around about narrowing the field of 68 to just 16, hoping that less games would lead to a still thrilling tournament, while helping alleviate any fears of coronavirus. Of course, that ended up not happening, but it was discussed.

The next morning, Gavitt presented the idea to the men’s basketball selection committee. He said the hope was to play games starting Thursday at State Farm Arena in Atlanta. The city had been scheduled to host the Final Four at Mercedes-Benz Stadium on April 4 and 6.

The idea was to have the selection committee choose the top 16 teams in the country, regardless of conference, to participate. The first three rounds would have been played Thursday-Saturday, with a championship game Monday night. Gavitt said he believes eight or nine of the 32 Division I conferences could have been represented.

“Far from ideal. Far from perfect,” Gavitt said. “Imperfect as it may be, that was one of the only reasonable options we thought we could at least maintain some level of our tournaments.”

Gavitt said there was some hope early Thursday that a full tournament could still be played. As that faded, the idea of holding a smaller event got “mixed interest” from the committee.

“There was a real concern about not being inclusive enough, with only 16 teams,” Gavitt said. “But the other thing that was in play at that point in committee members’ minds, and we saw this play out at conference tournaments, once an NBA player was infected, I think it started to really hit home for the players, from what I’ve heard from coaches by text message and anecdotally.”

It would’ve been really interesting to see what the NCAA Tournament could’ve looked like with just 16 teams. Remember, even before March Madness was cancelled, there were reports that both the Duke and Kansas men’s teams weren’t going to participate either way, so how the committee decided on the 16 teams is something interesting to think about. Ultimately, they made the right call to just cancel the tourney altogether — even if it does ruin March for all of us.

Although we’re all bummed that March Madness is a no-go this season — and some college hoops coaches are pissed about it even more than fans are — given the paranoia surrounding the coronavirus, which included President Trump declaring it a state of emergency, it’s probably the smartest move not to get thousands of strangers together in one place to watch basketball. Saying that doesn’t make it an easier pill to swallow, but, regardless of how anxious or fearful you are about all of this COVID-19 stuff, you probably agree with it.