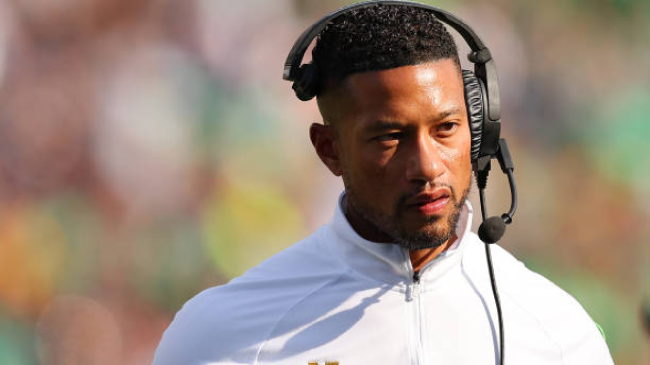 Fans in South Bend had a rough day today. Despite losing to Ohio State last weekend, fans had to be feeling good about their team’s ability to hang with the Buckeyes on the road.

This weekend, there was no moral victory. Marshall went into South Bend and outplayed Notre Dame on both sides of the ball en route to a 26-21 Irish loss.

It’s a brutal start to the season for the Fighting Irish, with their playoff hopes already gone and no conference title to play for. It’s also a historically bad start for Marcus Freeman.

After losing to Marshall today, Freeman has become the first Notre Dame coach to ever start their head coaching tenure 0-3.

The first two losses likely would have been seen as excusable by fans of the Fighting Irish. The first loss came in last year’s Fiesta Bowl after Brian Kelly chose to leave for LSU before the team even found out whether or not they’d be in the college football playoff. T

The Fighting Irish were actually in control early, but Oklahoma State fought back for a close win.

The second loss was on the road against Ohio State and was once again a competitive loss. Notre Dame entered both of those games as underdogs, with Ohio State being heavily favored.

This weekend was something different. Notre Dame was supposed to roll through Marshall at home today, entering the matchup as a 20.5 point favorite.

It is already clear this season isn’t what Notre Dame’s fans would have been hoping for and it seems like Marcus Freeman is going to need to make some changes if he even wants his team to crack the top 25 again this year.