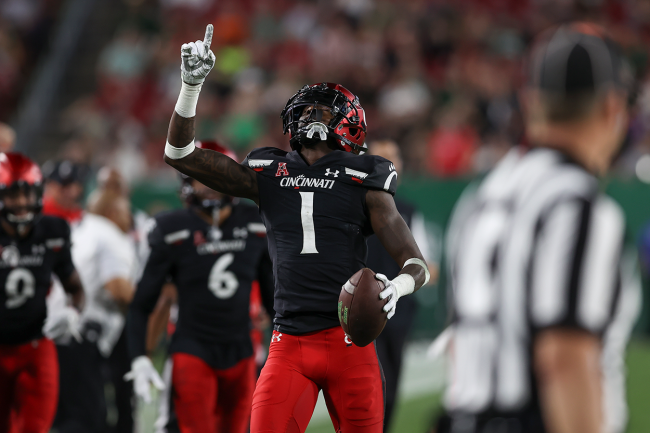 Cincinnati defensive back Ahmad ‘Sauce’ Gardner is considered by many to be the top prospect at his position in the 2022 NFL Draft. Others consider him the best defensive prospect overall.

Gardner recorded 68 tackles, 5.5 tackles for loss and nine interceptions over the course of three (somewhat COVID-shortened) years with the Bearcats. However, his play goes beyond the numbers and opposing quarterbacks simply do not throw his way often because they know it will not end well.

Despite his impressive performance that garners the nickname ‘Sauce,’ Marcus Freeman had to warmup to the idea. Prior to his time at Notre Dame, Freeman was the defensive coordinator at Cincinnati during Gardner’s freshman season.

When Ahmad Gardner introduced himself as ‘Sauce,’ Marcus Freeman joked that it would take a lot for him to be able to call the freshman by his nickname.

He recently spoke to The Rich Eisen Show about his former defensive talent and shared how he came around to the nickname.

“He comes to fall camp, and I remember he walked around and said, ‘Hey, my name’s Sauce,’” Freeman said. “And I remember saying in the first defensive unit meeting, ‘I will never call another man Sauce until you give me a reason to call you Sauce, alright?’ You see him making plays through fall camp like OK, this guy’s pretty good. You play him just a little bit during the start of the year, he’s rotating in.

“I’ll never forget, it was the game vs. UCF and he picks the ball off, runs a pick-six, the crowd goes crazy and I run up to him on the sideline and said, ‘You are now Sauce for the rest of your career. You are officially Sauce.’ From that moment, he was known as Sauce to me.”

Beyond the nickname, Freeman wasn’t entirely sure about Gardner when Cincinnati was recruiting him out of high school. He never wore a shirt while talking to the Bearcats staff.

“I remember the first time he came to Cincinnati,” Freeman said. “First of all, I remember recruiting him. Coach [Mike] Mickens, who’s our corners coach here at Notre Dame, was the one recruiting him. Every time we talked to him, he didn’t have a shirt on. We’d FaceTime him, and I’m like, ‘If we FaceTime this guy one more time and he doesn’t have a shirt on, we’re going to drop it.’ I’m like, ‘I don’t know about this guy, Coach Mick.’”

Clearly, things worked out well. Gardner went on to become a three-time All-AAC player, a consensus All-American in 2021, and a first round draft pick.