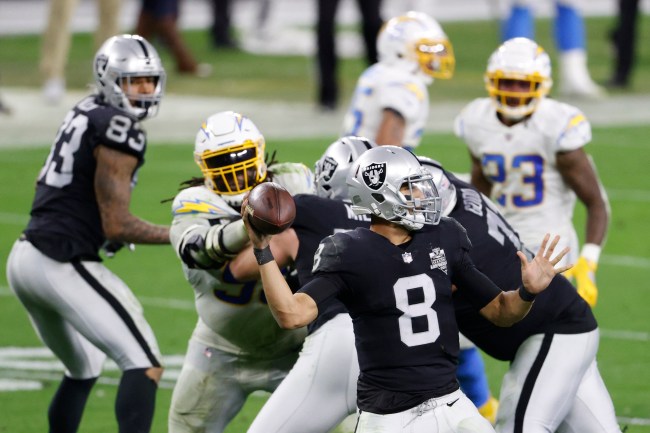 Marcus Mariota made a nice chunk of change for his services on Thursday night.

During the first quarter of the Raiders’ game against the Chargers, Las Vegas’ starting QB Derek Carr was forced to leave the field after he suffered a non-contact groin injury.

Raiders QB Derek Carr is heading to the locker room with an apparent groin injury following this play. pic.twitter.com/iOXIY4SYMk

The Raiders went on to lose the game in heartbreaking fashion but the former Titans QB more than held his own against the Chargers.

Raiders backup QB Marcus Mariota entered the game for injured Derek Carr and took the offense down the field flawlessly.

The backup QB went 3-of-3, rushed 11 yds and threw a 35-yard dime to Darren Waller to put the @Raiders ahead in #LACvsLV.

According to ESPN’s Field Yates, Mariota made an extra $825K for his efforts against Los Angeles as several contract bonuses kicked in when he stepped in for Carr.

If Marcus Mariota plays more than 60% of the snaps in any game this year, he earns a $200K incentive. With a win, that number jumps to $325K.

While Mariota is probably happy about the extra money it seems like he was more excited about finally being able to play in a game again.

A very revealing honest #marcusmariota about what he’s gone thru getting back his confidence. From the heart #Raiders pic.twitter.com/HGZWY1Mw3T

“You know to be truthful, it’s been a long journey,” “I’ve been through kind of everything, from injuries to surgeries, to mental lapses, and the confidence thing. I just really appreciate the Raiders and the entire organization for kind of helping me through that. I was trying to kind of find my way again and they gave me an opportunity to take some time, were patient with me and I just appreciate the fact that they were willing to do that. Again, it’s just kind of part of being an athlete. You’re going to go some ups and downs, and I think the staff did a great job of kind of keeping me level-headed and kind of fighting through it. When it comes down to it, it’s still ball. I just love being out there again. It was fun to play. Unfortunately, we just didn’t make enough plays.”

As of now, it appears that Mariota will be playing the next few weeks for the Raiders considering Carr’s groin injury has been deemed “significant” by coach Jon Gruden.