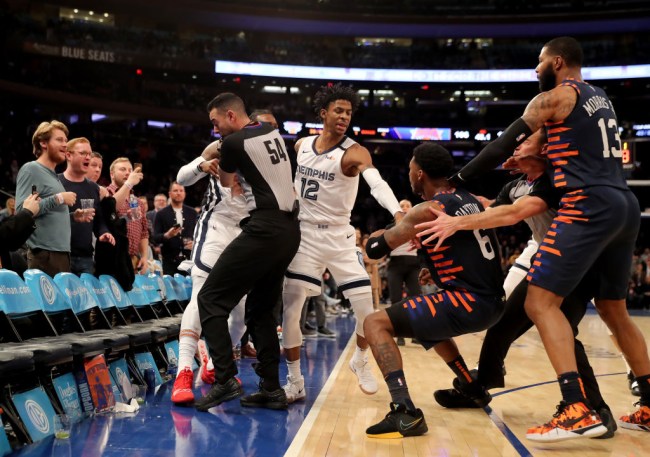 The Grizzlies played visitor to the Knicks on Wednesday night. It was your typical game at the Garden for most of the night with the Knicks taking yet another beating on their home court, but things took a bit of a turn.

It appears as if we’ve arrived at that point in the NBA season where the Knicks are just going to start taking their frustrations out of being one of the worst teams in the league by fighting the opposing side.

With just under 50 seconds left in the game and with Memphis up 18, Jae Crowder did the unthinkable by playing defense and making a steal in the Knicks back-court. He then dribbled over to the corner and launched a three. Elfrid Payton didn’t like that gesture too much, so he decided to throw Crowder to the ground.

The Knicks and Grizzlies got into it 😳 pic.twitter.com/ysQO5S7aWC

Marcus Morris was ejected from the game after running over and shoving Ja Morant in the scuffle, but that’s not the story here. What Morris said in the locker room following the game is without question the worst look any NBA player has had this year and the ultimate face-palm moment.

These quotes, via New York Post are outrageous and don’t really make any sense. The best part? Morris started by saying that it didn’t bother him that Crowder made the late-game steal, but then went to a different planet with these quotes.

“Obviously at the end, that was very unprofessional,” Morris said. “They’re winning the game, that’s a good team. [Crowder] does stuff like that.”

“I think dude is just, he plays the game a different way. A lot of female tendencies on the court,” Morris said. “Flopping, throwing his head back the entire game. It’s a man’s game and you just get tired of it at the end of the day.

“When you step back and shoot a 3 and try to rub it in that they’re winning, it’s just unprofessional,” Morris added. “That’s soft. His game is soft. He’s soft. That’s how he carries [himself]. It’s just very woman-like.”

What a choice of words there, sir.

"He's got a lot of female tendencies on the court, flopping and throwing his head back…he's soft, very woman-like"

Before breaking down what Morris said postgame, I think it’s worth discussing Crowder’s move late in the game and how there’s absolutely nothing wrong with it. Let’s not forget that this is an extremely young Grizzlies team still building an identity that’s being led by a rookie point guard in Morant, a second-year guy in Jaren Jackson Jr. and a third-year player in Dillon Brooks.

Crowder sending a message to his young team and the Memphis fanbase of ‘we play until the end’ is not the worst thing in the world. The Grizzlies find themselves in a playoff spot right now and if you would have predicted that two months ago you would have been laughed at.

As for Morris’ comments, well, they’re not great, not great at all.

I apologize for using the term “female tendencies” I have the upmost respect for women and everything they mean to us. It was a Heat of the moment response and I never intended for any Women to feel as though in anyway I’m disrespecting them. Again I apologize with my comments.

Morris and the Knicks are clearly a frustrated team while being absolutely irrelevant when it comes to the NBA scene. We’re talking about a team that’s 13-36 and losers of 12 of 15.

Morris led the Knicks in scoring with 17 points in his team’s 21 point loss. Crowder finished the night with 18 points while Brooks led all scorers with 27 points.