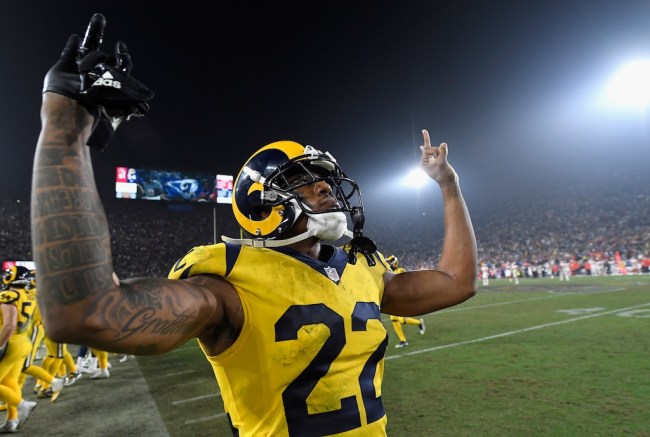 Marcus Peters of the Los Angeles Rams is a proud individual. He’s going to talk trash when he can, and he’s not going to back down from anyone who challenges, player or coach, which he showed this season by firing shots at New Orleans Saints head coach Sean Payton following the two teams’ last matchup earlier this year, and then again this week leading up to the NFC Championship Game.

That said, the 2018 season hasn’t been a great one for Marcus Peters, his first with the Rams. After coming to L.A. from the Kansas City Chiefs — where he played his first three seasons and earned two Pro Bowl trips — the cornerback rates a little bit lower than he typically does in terms of evaluations. For that reason, L.A. Times writer and ESPN guest Bill Plaschke asked the fiery Peters to evaluate his own season up to this point. Marcus Peters’ response was both pure gold and as aggro as you might think from the guy.

First, here’s video of the exchange between Peters and Plaschke during the press conference.

And, to paraphrase Marcus Peters, here’s how he basically told off Bill Plaschke without actually going off on him, per Total Pro Sports.

He closed his eyes and moved his mouth to within inches of that microphone.

With that final pronouncement, it appeared the news conference would shift to the next questioner. But just as Peters promised, he wasn’t done yet.

“According to the stats, you’ve had a season below your normal standards,’’ I said.

“I come from a place, you’re going to have ups and downs, as long as your ass don’t stay on the ground, you pick yourself up, you look yourself in the mirror, you keep striving, you keep building, to become the best player that you can be, become the best person you can be, I think all the rest will take care of itself, my resume speaks for itself,’’ he said.

He was just getting started.

“Everybody has bad days,’’ he said. “I mean, you come to work, you wake up some days, you don’t feel like going to work, right?’’

He was glaring at me now, looking at me to address his question, and, knowing that I might have ticked off a stormy dude who climbed into the Coliseum stairwell this year to curse a fan, this was suddenly one of those bad days.

“Today, yeah,’’ I said with a smile, and some folks laughed, but not Marcus Peters.

Note to self: Never question Marcus Peters’ abilities, or something like this might happen. But, hey, Plaschke probably knew this would be the reaction from the cornerback even before he asked the question, so he couldn’t have been too surprised.

Given the fact Peters have a chance to shut up both the reporter and prove to Sean Payton that he’s up for the challenge of being targeted by the Saints this weekend — as he was in the first matchup — this has to add more fuel to Marcus Peters’ fire. Ah, just get here already, Sunday.