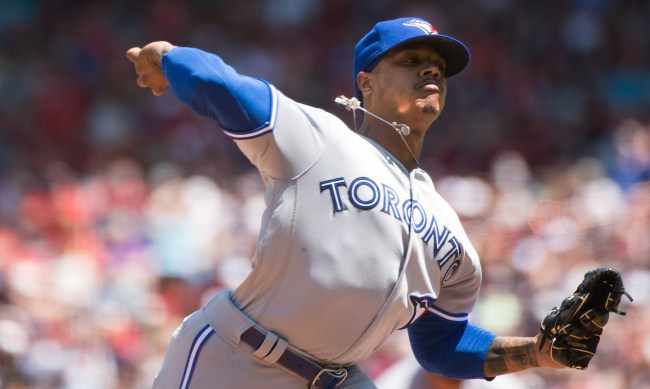 Considering how much of the sports internet’s attention span has been eaten up by the drama of the NBA of late, it’s about time someone in Major League Baseball got involved in a petty, public beef, don’t you think?

The fact that this particular beef involves the Boston Red Sox organization being butthurt about something is just the cherry on top.

Sunday night, during the NESN broadcast between the Red Sox and Blue Jays, demonstrative pitcher Marcus Stroman struck out Eduardo Nunez and celebrated with a scream and a glare towards the Boston dugout.

This little bit of irony was not lost on those in the know on Twitter, with the best tweet coming from MLB and ESPN analyst Rob Friedman who quoted Eckersley’s bio on Wikipedia, “He was aggressive and animated on the mound, and he was known for his intimidating stare and pumping his fist after a strikeout.”

That's not Dennis Eckersley calling Stroman's celebrations "tired," is it?

"He was aggressive and animated on the mound, and he was known for his intimidating stare and pumping his fist after a strikeout. "https://t.co/Cu6cA6k49A

Somewhere a pot is screaming at a kettle. pic.twitter.com/BbYKfT78Qj

This response was also pretty spot-on…

Stroman apparently got wind of Eckersley’s comments, or he follows Friedman on Twitter, and weighed in with his own thoughts, calling the ex-pitcher a clown, hypocrite, and trash.

His comments are always trash. 🤷🏾‍♂️

Stroman has turned himself into Boston’s public enemy number one ever since he deployed some subtle gamesmanship on the Red Sox back in May, pissing off Boston’s manager Alex Cora.

That led Cora to say after the game, “It’s the same thing with him every day. He competes a certain way and people don’t like it.”

See? This is exactly what MLB needs. A guy who is 5-9 on the season getting into a pissing match with a 64-year-old announcer for a team that is 12.5 games ahead of them in the standings. It’s just so NBA it hurts.