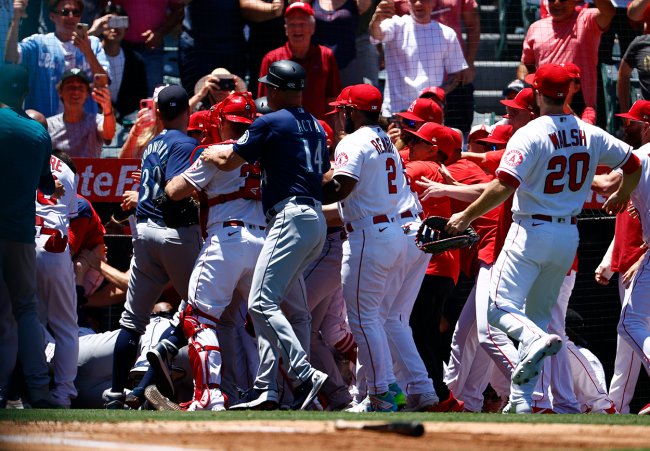 Sunday afternoon’s game between the Angels and Mariners got chippy in a hurry. During the top of the second inning, Seattle outfielder Jesse Winker got hit by a pitch.

From there, a bench-clearing brawl proceeded to unfold. It was utter mayhem.

While some MLB dust-ups might involve a push, a shove, or some not-so-nice words exchanged before the two sides get separated, that was not the case on Sunday. It was a lengthy, vicious fight that saw punches thrown, kicking, and everything in between and led to an incredible pizza delivery.

There are likely suspensions to come from the incident and rightfully so. However, it is almost guaranteed that there will be one member of the Angels that will not be suspended.

That would be Noah Syndergaard.

When you watch video of the brawl, the 29-year-old pitcher barely involves himself. Now, almost every player from both teams were involved, so Syndergaard was too.

But he definitely had different priorities.

In a video of the incident, Syndergaard appears to be focused on making sure his hair was okay before getting in on the action. It’s hilarious and although there is a chance that it might not be him and might be David MacKinnon (who looks astonishingly like Syndergaard), it certainly seems to be the pitcher.

Here is a look at Syndergaard during the fight:

And here is the video in question, where somebody fixes his hair before getting into the mix of things:

And the best part is Noah Syndergaard fixing his golden locks as all hel breaks loose pic.twitter.com/jG0w6NHIOt

Now, it could be MacKinnon. But it certainly seems to be Syndergaard. Either way, it’s hilarious.