First Pitcher Ejected For ‘Sticky Stuff’ Says ‘All He Used Was Rosin,’ Which Is A Terrible Look For The MLB If True 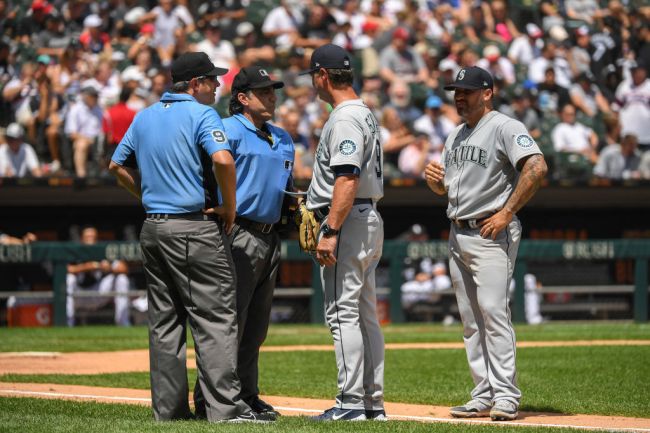 Seattle Mariners pitcher Hector Santiago became the first pitcher to be ejected amid Major League Baseball’s crackdown on ‘sticky stuff.’ The 33-year-old reliever claims that he was not doing anything wrong. Should that be the case, it’s a bad look for the MLB.

Santiago, an All-Star in 2015, has been in the league since 2011. He was in his third inning of work during the first game of a doubleheader on Sunday and was pulled after giving up a pair of hits and walks.

On his way to the dugout, Santiago was checked for foreign substances for the first time in his career. Per the league’s new rule on inspecting pitchers, he handed his glove over to umpire Phil Cuzzi.

He reacts by smiling. pic.twitter.com/239GzVizLs

The video shows the umpire crew checking the inside of his glove.

“What we do is we go around the whole glove, feeling for anything that would be sticky or something,” crew chief Tom Hallion said. “It was very noticeable, and then the rest of the crew inspected to make sure we were all in agreement. All four agreed that it was a sticky substance, and that’s why he was ejected.”

After the game, the 10-year veteran claims that he only used rosin. Seattle is in the middle of an unprecedented heatwave and Santiago said he was trying to keep the sweat from dripping down his hands.

Hector Santiago says he was using nothing illegal and it was just a mixture of sweat and rosin that turned sticky. pic.twitter.com/CtU1tamf8G

Santiago’s glove was confiscated and wrapped by a league official. It will be further inspected in New York under the new rule that went into effect last week.

“Once they take it back and check it, it’s just sweat and rosin,” Santiago said. “If they’re going to do all this science stuff, it’s going to be sweat and rosin. We’ll be all right.”

If Santiago is lying and the testing reveals a foreign substance, he will face a 10-game suspension. The team will not be able to replace him on the roster during that time.

However, if he is truthful in his rosin usage, he will be cleared of any wrongdoing. If that is the case, it’s a bad look for the league.

Foreign substances are strictly forbidden. However, a comment beneath Section 6.02 in the MLB’s official rulebook makes an exception for rosin: “A pitcher may use the rosin bag for the purpose of applying rosin to his bare hand or hands. Neither the pitcher nor any other player shall dust the ball with the rosin bag.”

Santiago claims that the umpire crew’s sticky suspicions come from sweat and rosin— a legal substance.

If the tests come back negative, as the Mariners expect, it will only further the negative stigma surrounding the checks.

Many big-name pitchers across the MLB have already spoken out regarding their frustration. Gerrit Cole had a strong response to the crackdown, Max Scherzer lost his mind over being checked and Tyler Glasnow blamed a season-ending injury on the league’s cold-turkey approach.

If the first ejection of the season goes 0-1 and results in a negative glove test, the questions will only be amplified:

Santiago’s glove will forever have its place in baseball history, for better or for worse. Now we wait for the results.