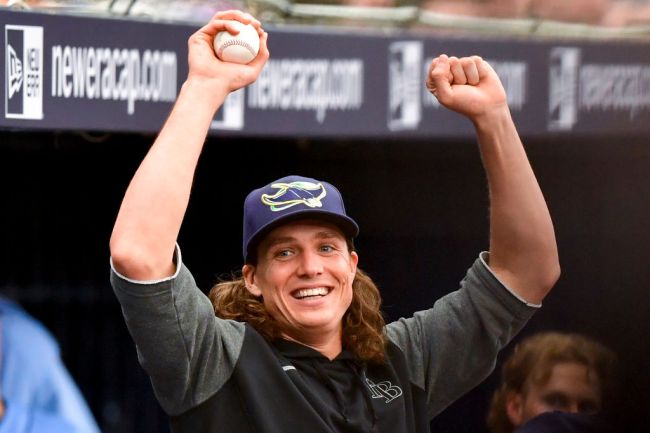 Tampa Bay Rays pitcher Tyler Glasnow suffered a partial UCL tear and a flexor strain on June 15th. His season might be over, but he offered an optimistic outlook on his rehabilitation on Friday and couldn’t stop talking about stimulating his bone.

Glasnow, who posted a 2.66 ERA and recorded 123 strikeouts in 88 innings pitched, was very vocal about the injury. He directly attributed his tear and strain to the MLB’s recent crackdown on sticky substances.

The 27-year-old said that he typically uses a mixture of sunscreen and rosin to get a grip on the ball. When he went cold turkey, the injury occurred.

In his first non-press conference interview since suffering the injury, Glasnow said that he hoped to be back before the 2021 MLB playoffs. He discussed his rehab and made for a hilarious soundbite.

Glasnow was “co-hosting” the Chris Rose Rotation on the Jomboy Media YouTube channel and shared his bone stimulator. A bone stimulator is a device that he wears on his injured elbow.

The device generates an electromagnetic field that helps promote new bone growth and fusion. It is also has a hilarious name.

“You did say ‘bone stimulator,’ right?” Rose asks with a grin, referring to something that could have been very different with an extra r on the end.

Glasnow posted a clip from the show where all of the times he says “bone” and “bone stimulator” are spliced together. It’s amazing.

In the comments, Rays teammate Brett Philips commented “I’d let you stimulate my bones no doubt.” Amazing stuff all around.