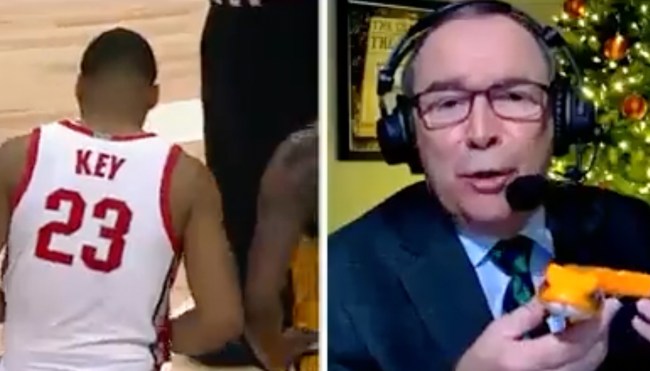 Anyone who’s had the pleasure of tuning into a basketball game where Bill Walton’s been tasked with providing commentary knows you never going to get when he’s behind the microphone.

He certainly knows his stuff when it comes to basketball, but thanks in no small part to the mind-expanding substances the avowed Deadhead has dabbled in over the years, you never know when he’s going to launch into a minute-long rant about cycling through the mountains or give viewers a brief lecture about bridges in the middle of a game.

In a lot of those cases, there’s no particular onus for any of Walton’s famous rants, but the same cannot be said about a similarly bizarre segment we were treated to during Wednesday’s men’s basketball showdown between Towson and Ohio State courtesy of ESPN’s Mark Adams.

I’m assuming most people probably don’t know that Buckeyes forward Zed Key not only keeps a ball python as a pet but runs an Instagram account exclusively devoted to chronicling the adventures of the reptile he’s named “7.”

Toward the end of the first half, Adams not only took the chance to educate viewers who might be in the dark about that fact but did a very deep dive into the species by letting a nationwide audience know ball pythons become sexually active at the age of five and are currently wrapping up the end of a mating season where they bang all over the place in central and western Africa.

Thanks, Mark. That was definitely something everyone needed to know.